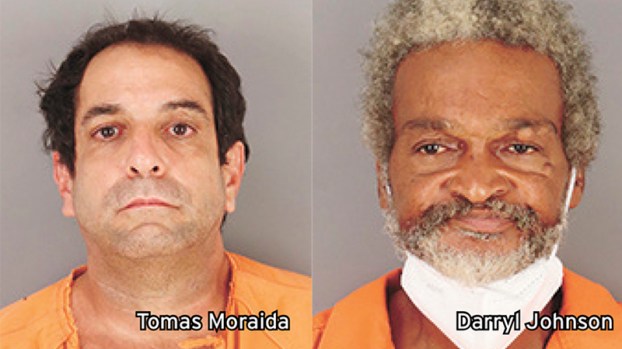 Two men charged with stealing briskets meant for a police officer’s funeral, among other items, were indicted this week by a Jefferson County grand jury.

Deputies with the Jefferson County Sheriff’s Office were dispatched to Courville’s Catering in Beaumont in reference to the burglary on Aug. 14. While there they spoke with the manager, who said she discovered the six briskets, valued at $250, that were placed in the barbecue pit the night before were missing.

Surveillance video showed what appeared to be two men enter the building and take the briskets, a Shop Vac valued at $200 and an antique boat motor valued at $300.

The video also showed the two men tearing into a cash register, according to the probable cause affidavit.

The business manager placed the video on Facebook in an effort to gain suspect information.

Beaumont Police Department detectives contacted the sheriff’s office and identified one of the suspects as Maida, who they arrested in the past for burglaries. A family member also positively identified Maida as one of the men on the video.

He was arrested while driving in Beaumont. The briskets were not recovered.

He agreed to go to the sheriff’s office to be interviewed and denied it was him on the video.

Johnson’s common law wife was also interviewed and positively identified Johnson as the man in the video. She also, according to the document, identified the shirt Johnson was wearing in the video and is set to turn the shirt over as evidence.

The brisket was for the reception for approximately 800 people following the funeral of Beaumont Police Officer Sheena Yarbrough-Powell.

Yarbrough-Powell was killed when a suspected drunken driver struck her patrol car head-on. She was a passenger in the police unit. The driver and a fellow officer was injured.

A representative of Courville’s said extra brisket was made to feed to attendants.

Moraida remains in the Jefferson County Correctional Facility on a $250,000 bond for burglary of a building. An official with the sheriff’s office said Moraida has a number of ‘motion to revoke probation’ issues and was on probation when he allegedly committed the crime.

Johnson also remains in the jail on a $250,000 bond for burglary of a building.

The Port Arthur Police Department has released suspect information in the robbery of Ana’s Mexican Bakery. According to video and... read more