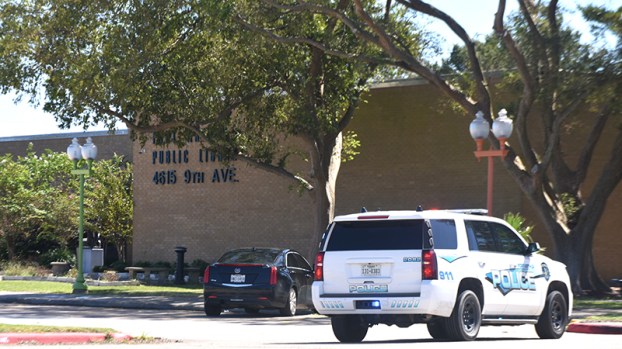 A police unit blocks entrance to the Port Arthur Public Library after a call of two suspicious packages on Wednesday. (Mary Meaux/The News)

Wednesday’s call to the Port Arthur Police Department regarding two suspicious packages outside the Port Arthur Public Library by library director Steven Williams may have yielded no bombs or dangerous materials, but it was a well-placed call.

Williams said he would rather there a big show over nothing than no show and something terrible occur.

The call came in about 2 p.m. and the all-clear was made about an hour later as Port Arthur police officers and firefighters as well as Beaumont Independent School District Police Cpl. Kendrick Hartfield and his K9 Bleu.

Bleu, an explosion detection certified German shepherd, began working with BISD in August 2019, according to information from BISD’s website. The dog and handler are nationally certified with the National Narcotic Detector Dog Association.

Firefighters were positioned in different areas on the library grounds at 3601 Cultural Center Drive with a HAZMAT truck near the rear and several fire engines in front along with a fire official’s pickup truck.

The call was taken seriously, as it should be.

On Sept. 29 in Topeka, Kansas, a suspicious package was reported in that town and found to be an intentionally placed IED device in a vehicle. The device exploded, and the blast was confined to the vehicle, which was parked at an apartment complex.

The idea of a bomb being placed anywhere in Southeast Texas isn’t that far fetched. Last year a 42-year-old Beaumont man was sentenced to federal prison for an explosion that occurred May 10, 2018, at St. Stephen’s Episcopal Church in Beaumont. The explosion caused damage to the church’s administration building, and thankfully no injuries were reported, according to information from the Eastern District of Texas.

According to information presented in court, on April 26, 2018, federal agents discovered what appeared to be a homemade destructive device inside a U.S. Postal Service priority mail service box at a Starbucks on Dowlen Road in Beaumont.

Shortly after discovering the device, the Beaumont Police department began receiving cryptic postcards referencing the bombing. One of those postcards read: “DO YOU WANT BMT TO BECOME ANOTHER AUSTIN . . . .” This postcard appeared to reference serial bombings that occurred approximately a month prior, in Austin.

During the course of those Austin bombings, five package bombs exploded killing two people and injuring another five.

The emergency officials in Topeka handled the incident as the ones in Port Arthur did on Wednesday.

No bombs were found in the two backpacks outside the library, only textbooks.

Williams had cause to worry — the homeless population occasionally visits there but usually hides their belongings. These backpacks were in the open, suspiciously.

Kudos to Williams for making the call and thanks to the first responders who worked the scene.

Exciting times are ahead for the Nederland Economic Development Corporation and for our planned events. We have so many fun... read more