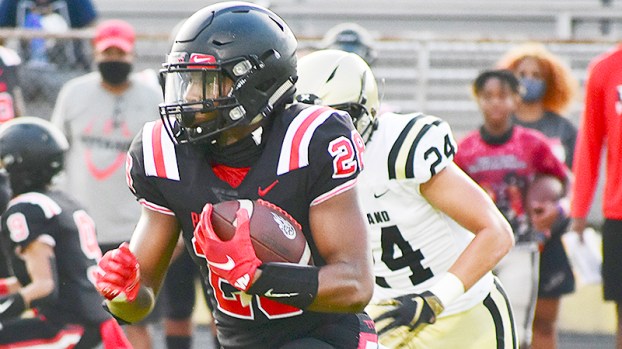 Adrian Hayward of Memorial finds running room after taking a block from Tre’Vonte Caines (55) during a scrimmage at Nederland. (I.C. Murrell/The News) 9-17-20

After staving off a Port Neches-Groves comeback in an overtime win, the Memorial Titans will go back on the road to take on Barbers Hill Friday.

Titans head coach Brian Morgan is preaching hydration after several of his players had to come off the field against PNG due to cramping.

“It’s two-fold,” Morgan said. “You always get cramps during the first game. You expect some, but not that many. I think one less week of practice and scrimmage played into it.”

Morgan also pointed to students coming back to school under the coronavirus restrictions as a possible reason for hydration issues.

“In Port Arthur, our kids came back to school last week,” he said. “There is no water fountain available with the COVID stuff. All week long, they are only drinking at lunch. A few of the guys have the awareness to bring a water bottle with them.”

“We are trying to make sure they all have their water bottles,” he said. “You can’t just do it on Friday. You have to hydrate throughout the week.”

Another area Morgan is emphasizing in practice is mental mistakes and special teams.

“You’re going to have those,” Morgan said. “That was one of those things where you miss a week of practice. You miss out on some situational stuff. You don’t have time to practice some of the basics. There wasn’t enough time to say ‘If this happens, then you do this or that.’ We have to get that cleaned up. Without that happening, we probably handle the game pretty easily. That’s what kept them in the game.”

Morgan said he sees a lot of similarities between PNG and the Barbers Hill Eagles.

“They are going to do a really good job coach,” he said. “They graduated some people, but their d-line is still really talented. They have one of the better d-lines that we are going to see all year. I think that will be a good test for us.”

The game will be played at Eagle Stadium in Mont Belvieu. Kick off is set for 7 p.m. Friday.

Tony Brooks was listed as a quarterback on the Memorial Titans’ depth chart. After spending the a limited offseason learning... read more