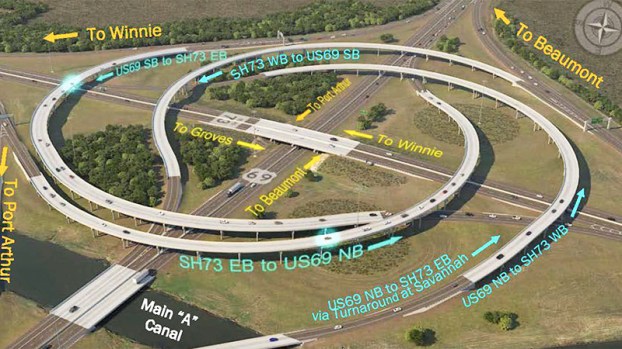 What is currently a highway cloverleaf is likely to become a turbine or spiral type interchange along U.S. 69 and Texas 73 to improve traffic flow and safety.

The Texas Department of Transportation-Beaumont District is proposing the improvements and is accepting public comments on the project.

The deadline is Oct. 9 for the comments to be part of the virtual public meeting record.

A prerecorded public meeting video with audio and details of the project can be seen at txdot.gov/inside-txdot/get-involved/about/hearings-meetings/beaumont/092420.html.

Public information officer Sarah Dupre said for TxDOT wants to know how people feel about the project, adding residents may have ideas TxDOT has not considered.

“We definitely urge people to give us feedback,” Dupre said.

Crash data collected from 2013 to 2017 shows numerous wrecks along U.S. 69 and Texas 73, where motorists merge into traffic.

According to information from TxDOT, the proposed improvements include: reconfiguring the interchange from the cloverleaf configuration to a turbine or spiral configuration, adding direct connectors, adding main lane improvements, improving frontage road and ramps, adding retaining walls and culverts and widening and replacing bridges.

A tentative timeline of the next steps for the project show an environmental review in late 2020 to early 2021, finalize design and construction plans by late winter/early spring 2021 and anticipated construction activities to begin summer 2021 or fall 2021.

The estimated cost is $77 million, according to the Texas Department of Transportation, which is currently scheduled to go out for bids in the spring.

Written comments from the public regarding the proposed project are requested and may be submitted by mail to the TxDOT Beaumont District Office, 8350 Eastex Freeway, Beaumont, Texas 77708.

Written comments may also be submitted by email to bmtprojects@txdot.gov.

All comments must be received by Oct. 9.

Once prepared, responses to comments received will be available online at txdot.gov and search for “US 69/SH 73 Interchange.”