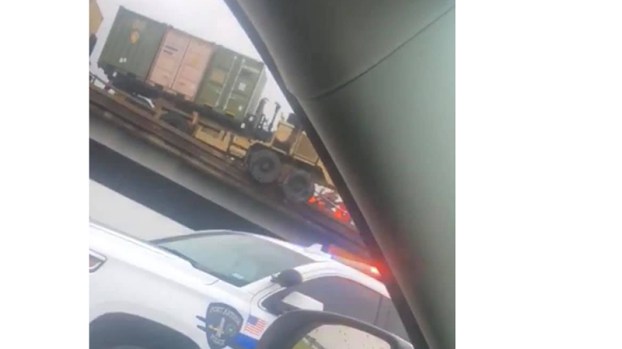 Port Arthur Police respond to the scene along U.S. 69.

At approximately 11 a.m. Monday, the Texas Department of Public Safety responded to a multiple vehicle crash on U.S. 69 in Port Arthur.

The crash occurred near Spurlock and involved at least five motor vehicles.

The preliminary DPS crash investigation indicates a 2018 Chevrolet pickup truck was traveling northbound on U.S. 69 followed by a 2020 Honda passenger vehicle, a 2019 Toyota SUV and a 2013 Cadillac.

All four vehicles were slowing down due to stopped traffic when the driver of a 2014 Dodge van failed to control his speed and rear-ended the Cadillac, causing a chain-reaction crash.

The impact of the initial crash caused the Cadillac to rear-end the Toyota. The Toyota rear-ended the Honda and the Honda struck the Chevrolet pickup truck.

The driver of the Dodge van, 27-year-old Timothy Labbit of Groves, was taken by ambulance to CHRISTUS Southeast Texas St. Elizabeth with unknown injuries.

The driver of the Toyota, 61-year-old Tara Butler of Beaumont, was also taken by ambulance to Baptist Hospitals of Southeast Texas with unknown injuries.

There were no other injuries reported.

All northbound traffic lanes of U.S. 69, near Spurlock were closed for more than two hours, but have since reopened to traffic.

All information is preliminary and there are no additional details available at this time.

At approximately 11 a.m., the Texas Department of Public Safety responded to a multiple vehicle crash on U.S. 69 in... read more