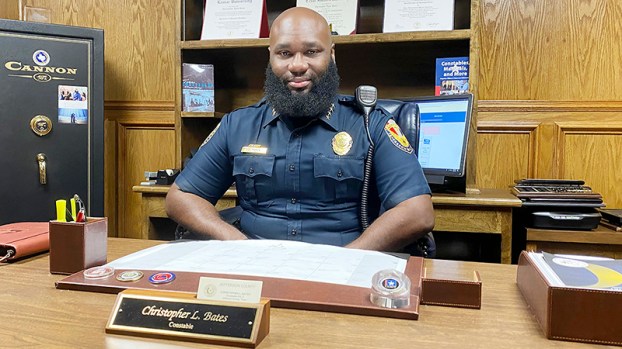 Christopher Bates is the Precinct 2 Constable.

He did not come from a long line of police officers, nor did he dream of wearing a badge as a child. It was not until he was in his early 20s when he spoke with a former high school friend that he even considered the job.

Within a few years, Bates became the youngest elected official in Jefferson County history when he was voted constable at 26.

“I have an uncle that retired from corrections in Albuquerque, but other than that, I am the only one in the family,” he said. “I’m The Lone Ranger. I was about 22 and we were at a football game and one of our friends was working security and we were talking to him. From there, he told us there was a test coming up. Me and two of my friends went and took the test. I passed the test and they failed.”

“The police chief at the time called me back for a final interview and offered me the job,” Bates said. “I said ‘yes,’ but in the back of my mind I was thinking ‘What in the world did I just do?’ I was in college at the time as an education major. I changed my degree to general studies and finished my degree online.”

Bates left PAPD to work in a truancy program at Precinct 8.

In 2010, the county decided to lay off some constable deputies to cut costs.

Bates, being the last one hired, knew he would be let go soon and decided to resign.

He learned the Port Arthur Independent School District was starting a police department and took a job as a truancy officer. However, the school board ended the district’s police program.

The police program returned during the 2019-20 school year.

“I just needed a job to be completely honest,” he said. “At that time Constable Leonard Roccaforte said he was going to be retire. At that time, I had two young daughters. I knew I had to do something to provide for my family … I decided to run. I thought I knew a few people that would vote for me. My family and everyone were on board.”

“Two of the first people I asked in the political area were Commissioner (Michael) Sinegal and, now, Mayor Thurman Bartie. They gave it to me real and told me how it would be in politics. After I got that information, I knew it was what I wanted to do.”

Bates can often be found participating in philanthropic work like the Constables Care Program, food drives and school supplies giveaways.

“Even when I was working for PAPD, I was able to see that there were some needs for our community,” he said. “I saw there was a need for our young people. I wanted to be able to mentor them. Not everyone was afforded the upbringing that I had. That being said, I wanted to do what I could do by using my influence and career to better them.”

While Bates entered the political realm at a young age, he said he does not know where the job will take him and did not rule out future political ambitions.

“I feel like there is something more in the future,” he said. “I wish I knew. Right now, I’m just doing the best I can at this job. In my prayers, I haven’t had the direction for one particular position. I haven’t gotten my sign yet. What I have heard from my prayers is to build a foundation for whatever is next. That is what I am focusing on.”

NEDERLAND — The Nederland Economic Development Corporation is making a $300,000 plus investment in business and job creation along Nederland... read more