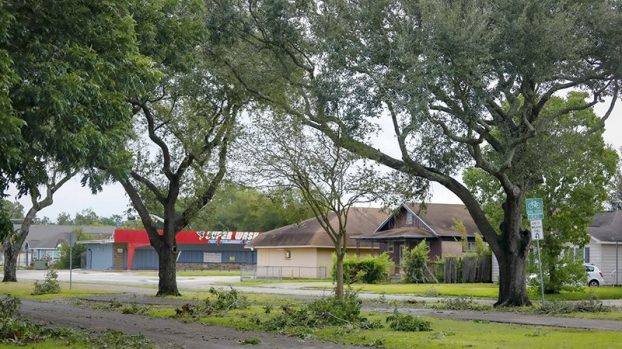 Tree limbs litter the margin on Thomas Street. (Jerome Cabeen/Special to The News)

City of Port Arthur crews are working to get trash and limbs picked up, bringing in heavy equipment from other departments to do the job.

“We are working diligently, worked all weekend and assigned more assets,” City Manager Ron Burton said. “Several of our dump trucks in parks and rec, public works and streets department — all of our heavy duty vehicles were assigned to trash last week and going through the entire city.”

Burton debunked a rumor that the city only had two working trash trucks.

Unlike some neighboring cities, Port Arthur did not utilize its hurricane debris pickup contract. Burton said there is certain criteria for the Federal Emergency Management Agency to fund debris collection and the city did not meet the requirements.

But that’s not to say there aren’t other ways to get help in picking up storm debris and trash. The city will apply for a contract with the Texas Department of Transportation, where there is a 75-25 percent match.

On Monday crews were in Highland Heights, Stadium Road and Griffing Park areas.

Burton asked for citizens to be patient as crews work to gather trash and limbs.

Residents can do their part to help by bringing their garbage cans in after they are emptied. They can also help by not placing trash and limbs in the ditches and not blowing cut grass in the ditches.

Cleaning culverts is the responsibility of the resident and something that should be done to help water flow in ditches.

“We were going to put all the equipment on higher ground but have another day (without rain) that we may not need to do until Wednesday,” Bartie said.

Bartie said crews are hoping to get most of the trash and limbs picked up soon.

A Port Neches man sought on an outstanding warrant for sexual assault of a child has been on the run... read more