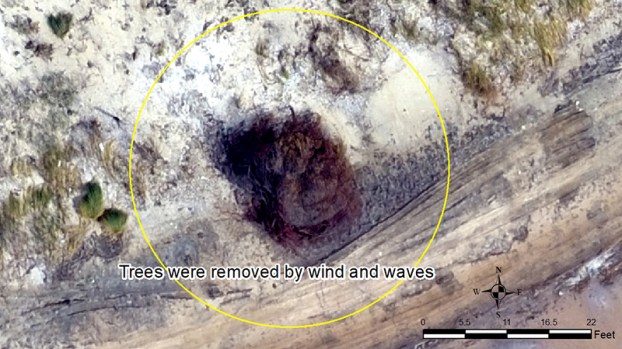 Lamar University’s Department of Earth and Space Sciences utilized an aerial drone on Sept. 11 to take photos and video imagery of Jefferson County’s coastline’s status in the aftermath of Hurricane Laura.

“We have satellite data, airplane data and drone data as sources, but the drone performs at higher resolution of imagery, because of its proximity to the ground and better control over flight,” said Jim Jordan, chairman/professor of the Department of Earth Space Sciences. “Our coverage area is smaller but with greater detail. Satellites yield a pixel size of 30 meters by 30 meters or about 100 feet by 100 feet. Our drones’ pixels are only about an 1-inch square.”

The Texas Point Sabine Pass buoy operated by the National Weather Service had registered two “major flooding” occurrences in Jefferson County as Hurricane Laura was making landfall in Cameron Parish, Louisiana, at high tide prior to and right after midnight of Aug. 26-27.

The NWS buoy showed a slightly more than 4-foot storm surge close to midnight on Aug. 26 followed by a second, larger major flooding event of 4.72 feet around 1 a.m. on Aug. 27, according to a buoy reading provided by the National Weather Service. 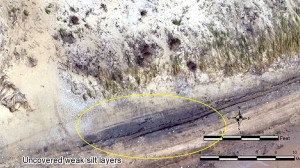 The rebuilding of the Jefferson County beach and dune system has been a top priority for state and federal natural resource agencies and Jefferson County for decades, especially after Hurricane Ike’s 2008 negative impact on the beach.

“As LU faculty in the environmental sciences, we have a responsibility to contribute our talents for the good of all the public and private stakeholders and resource managers in our community,” said Matthew Hoch, associate professor of aquatic and microbial ecology.  “Teaming with experts in the LU Geospatial Center to also contribute to monitoring beach berm and dune was a vision which is coming to fruition with a little nudge from Laura.”

Texas’ largest contiguous coastal marsh is located behind 20 miles of beachfront in Jefferson County and parts of Chambers County.

Full beach and dune restoration is a significant priority of Texas and federal agencies, including allocations of Texas’ share of Deepwater Horizon restoration funding.

Maintaining the desired mix of fresh and saltwater within the marsh is an ongoing management goal of natural resource agencies to conserve optimum vegetation health, which in turn provides habitat for migratory birds, waterfowl, alligators and insects as well as critically important nursery areas for finfish and shellfish. 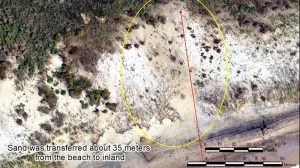 Aerial drone footage details the transfer of sand from beach to inland by about 35 miles. (Courtesy Lamar University) 9-11-20

Significant public recreation amenities including fishing, birding and waterfowl hunting depend upon a healthy marsh ecosystem.

“The goal of restoring our coastal marsh ecosystem has been a unifying cause for Texas and Washington natural resource leaders” Jefferson County Judge Jeff Branick said.

“A broad base of local stakeholders, including NGOs, local governments and industry is vital.  One of the things we’ve learned over the years is that planning precedes funding, and Lamar University’s data gathering, such as the drone overflight of Hurricane Laura impacts, plus their leadership in convening regional flood control strategy meetings, is forging needed consensus on next steps.”

The Texas General Land Office oversaw a 3-mile beach and dune restoration pilot project in 2017 along Jefferson County’s 20 miles of coast. Preliminary damage assessment after Hurricane Laura, including today’s drone imagery, indicates that the beach and dune pilot project held up well, as it was designed to do.

In addition, a 20-mile-long, 4- to 5-foot high clay berm set back more than 200 meters behind the beach did experience pressure from Hurricane Laura’s storm surge, including overtopping and some breached areas. However, a full estimate of the coastline’s status is forthcoming in an engineering report.

Vegetative debris was documented up against and on top of some of the clay berm. The clay berm experienced the most breached areas where there was no prior dune repair and held up best behind the 3-mile pilot project.

Museum of the Gulf Coast soliciting private contributions after eventful 2020

The Museum of the Gulf Coast was on track to surpass last year’s record for visitors when an uninvited guests... read more