Titans back in pads, eye scrimmage matchup with Nederland 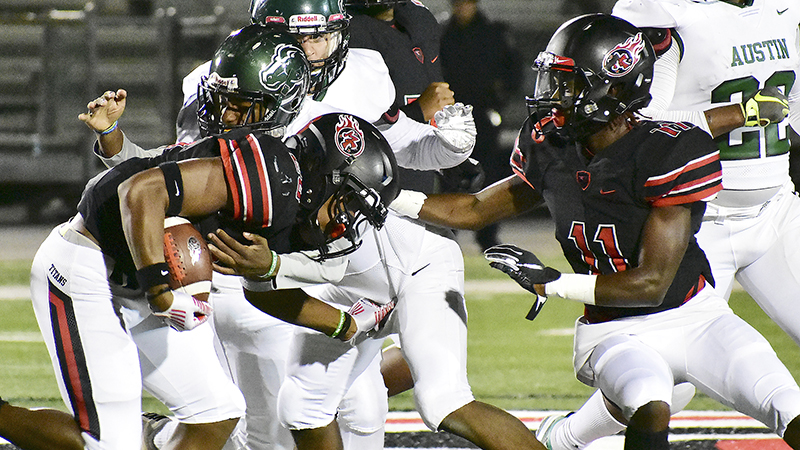 Memorial running back Adrian Hayward totes the football as wide receiver Tyrence Augusta (11) tries to block for him during the Nov. 8 home win against Houston Austin. (I.C. Murrell/The News) 11-8-19

Without the normal cues to let Southeast Texas know that the football season is near, the Memorial Titans have put on football pads for the first time since last fall.

“We had a good first few days of practice,” head coach Brian Morgan said. “More than anything, we are just excited to be out there with some pads on and not just shorts and t-shirts. That got kind of old.”

While Morgan said the Titans have done a great job of staying in shape during the extended offseason, he said the two-week break for Hurricane Laura took its toll.

“We were feeling really good about everything before the hurricane break,” he said. “That was actually a bigger influence on conditioning than anything given that it was two weeks prior to us being on the field. We’ve been on the field longer and you can definitely see towards the end of practice, it takes a toll on their legs. We had shoulder pads on (Wednesday). That is a different aspect. I don’t think it is going to be an issue by the time we play.”

Morgan said his players have done well to stay in touch with their teammates during the extended break courtesy of the global pandemic.

“It’s been great,” he said. “Our guys have done a really good job of being here throughout the summer and have been around each other. We feel good about the season.”

Players and coaches are ready to see an opponent in a different jersey, he said.

“I think you go all summer against your teammates and pretty much know the offense’s and defense’s calls,” Morgan said. “You know everything. Getting the pads on felt good. Those guys are super-competitive and ready. I told them I need them to be ready two weeks from now, not necessarily today.”

Morgan is also chomping at the bit to see some other jersey colors other than the Titans black and red.

Memorial will get that chance Thursday when it takes on Nederland at Bulldog Stadium for a scrimmage.

“As much as fun as practice is, it’s good to have some other competition,” Morgan said. “(Nederland coach Monte) Barrow and (Port Neches-Groves coach Brandon) Faircloth both do a really good job with their guys. It will be exciting just to get back on the field for sure.”