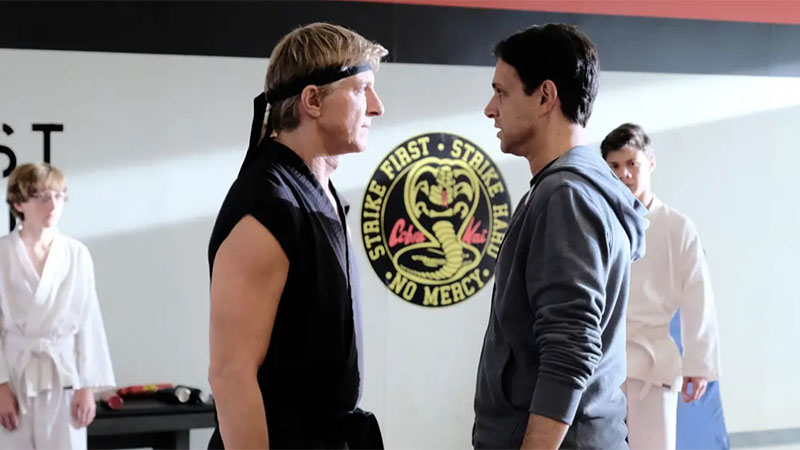 As a child of the 1980s, there are a few cultural touchstones from that decade that still hold a strong place in regards to my pop culture education.

The Karate Kid is one such work of entertainment.

The film, first released June 22, 1984 (I was 3 at the time) follows the hard luck story of a New Jersey teenager who moves to California while in high school.

The fish-out-of-water story follows high schooler Daniel LaRusso, who quickly becomes the target of senior bullies who use their karate knowledge to torment him. Daniel finds friendship and personal growth through the teachings of Mr. Miyagi, ultimately triumphing in the end at a large-scale karate tournament.

It’s pure Hollywood, right down to the love interest and musical score.

The most recent attempt to revive the entertainment intellectual property occurred through YouTube, which launched Cobra Kai, 30-minute episodes picking up in the main characters’ lives more than 30 years later.

Not known for producing “original” content, the show premiered to lukewarm expectations in 2018 and found a willing and growing audience.

Three seasons have since made YouTube quite happy, and now seasons 1 and 2 of the show are available on Netflix, which boasts a much larger subscriber base.

First we went back and watched the 1984 movie and it, surprisingly, kept the attention of my kids. My daughter, who can’t stand bullies, couldn’t get over why the Cobra Kai teenagers continued to harass Daniel. She was quite happy with the “good guy wins in the end” conclusion.

We must realize this is popcorn karate and in no way represents martial arts or the true discipline exhibited by those who make this their profession or passion.

In fact, most professional karate instructors I speak with about the film or television series are not fans.

I understand their feelings and fully recognize this is no documentary.

What is real are the conversations my wife and I are having with our children around this TV show.

There are not many things that bring two 39-year-olds together with a couple of pre-teens in mutual entertainment.

So, it’s great to watch which characters my children identify with, pull for or grant second chances to.

Do they see each character as “good” or “bad” or do they allow for human motivations leading to that general shade of grey?

I have to admit, I’m a huge fan of the first film, and it has nothing to do with the karate. The music and writing are superb. In fact, the lessons imparted by Mr. Miyagi are timeless. The back story of his character is so deep that most people miss it during their first viewing.

He is a tragic hero who was dealt nothing but rotten hands in life; yet, he saw a teenager in peril and vowed to build him up, working from the inside out.

He never sought tournament glory for his protégé, just for a boy to grow into a man, ready to provide for and benefit his loved ones.

It’s a great message and one I get to talk about with my children, not bad for a corny karate movie that is almost 40 years old.