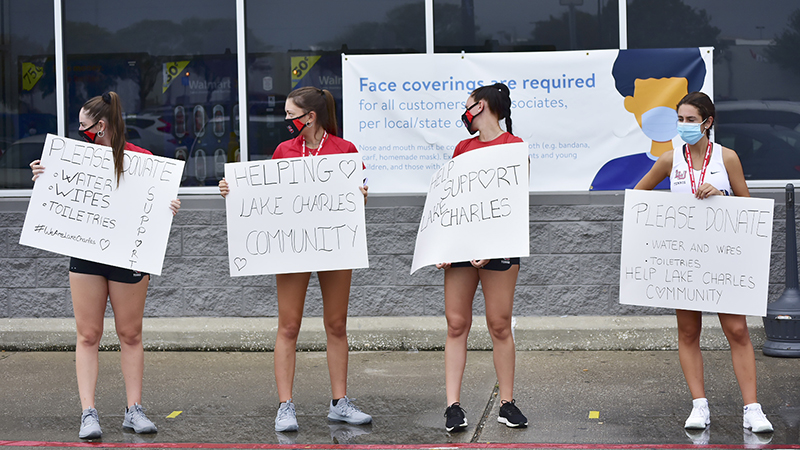 BEAUMONT — Throughout the athletic calendar year, the rivalry between Lamar and McNeese State universities is important to fans, coaches and student-athletes from all sports on both sides of the border. 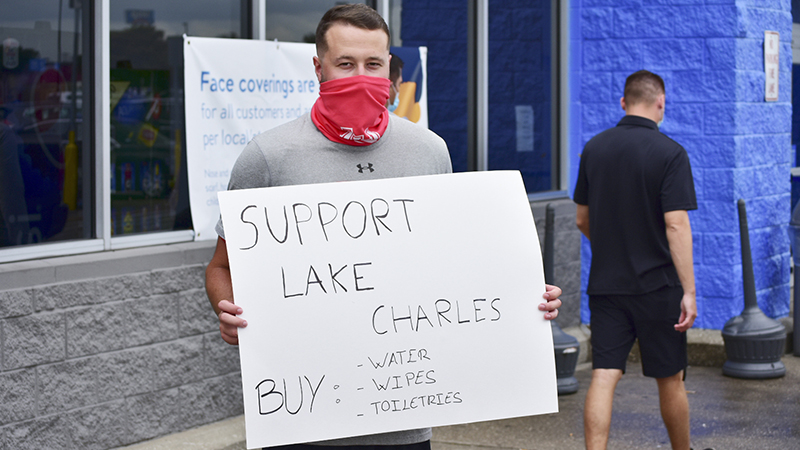 When Hurricane Laura made landfall on the Gulf Coast, the eye of the Category 4 hurricane passed right over Lake Charles, leaving a path of destruction.

It was at that moment that McNeese ceased being a rival to LU and took on a more important role – a neighbor in need.

The Lamar University football coaching staff teamed up with the LU women’s tennis coaches and student-athletes and arrived at Wal-Mart in Beaumont and Port Arthur on Thursday morning and set up near the entrance underneath red tents.

The goal was to accept donations of bottled water, baby wipes and other necessities to be delivered to those impacted in Lake Charles.

Almost immediately, patrons began walking up to the distribution spot to make donations.

“When the hurricane came through it basically avoided us – in terms of the real serious damage – but it went right through Lake Charles,” said LU head football coach Blane Morgan. “I think a lot of people in Beaumont feel fortunate, having been through so many situations like this that they want to help those in Lake Charles. When something like this happens, you look at those affected and we felt as a group something needed to be done.

“I have a connection with Coach (Frank) Wilson and I reached out to him earlier in the week, plus, one of our assistants went to McNeese. So we asked them what needs to be done and where can we help and that is where we got the idea,” added Morgan.

In just four hours, the Cardinals collected more than 300 cases of water, 49 jugs of water, 49 packages of toilet paper, more than 35 cases of baby wipes and 21 bottles of hand sanitizer to go along with numerous other toiletries.

“The folks of Beaumont and Mid-County were extremely gracious — from the items they donated to making cash donations. It just goes to show you that with all the bad news that is out there the majority of folks are charitable, have great hearts and want to give. They turned out today to help their neighbors in Lake Charles.”

The LU coaching staff left Friday morning to travel to Lake Charles to deliver the collected items. Once they have dropped off the items they will set up in the Chick-fil-A parking lot to grill burgers for first responders.

“It is just another instance of how people want to help and are willing to help when others are in need,” said Morgan. “Chick-fil-A has been very gracious allowing us to use their area to grill for first responders.”