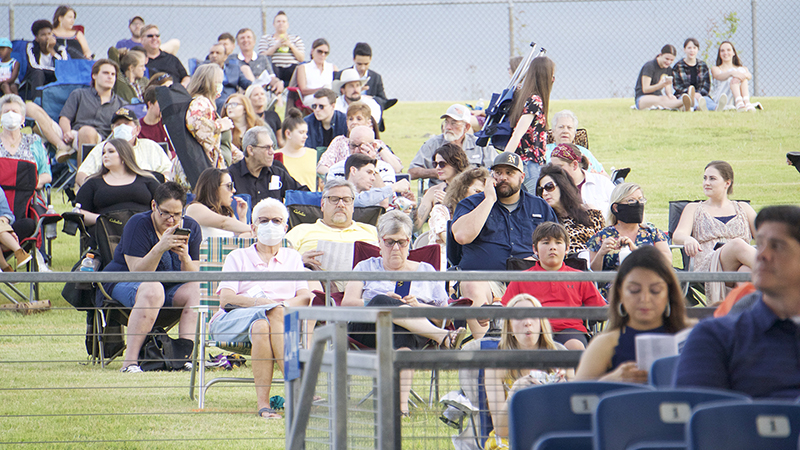 Nederland High School parents, families and friends wait on the lawn at Ford Park before graduation in May. (Cassandra Jenkins/The News)

BEAUMONT — With the sale of Ford Park off the table, a representative of Renaissance Development — the lone bidder for the property, has come forward with his take of the process.

An email sent to Port Arthur Newsmedia from Kevin Johnson, spokesman with Renaissance Development, provided voice to the saga on what was likely to become a horse racing complex and more.

“Our offer covers all outstanding financial responsibilities associated with Ford Park,” the statement read. “Additionally, our offer includes financial commitment to put another $43 million in guaranteed funds into the property over the first two years. Our offer provided a very detailed timeline, including itemized funding, for every improvement, addition or repurposing project on the property.”

Johnson said the Texas State Racing Commission on Thursday closed its open application period and though Renaissance didn’t enter into a contract with Ford Park, it submitted an application as well as the $98,000 licensing fee “with the belief that we can get a deal with the county” as it is committed to bring the project to Jefferson County along with some 400 direct and indirect jobs.

“In our offer we included a letter of guarantee from our financial partner, stating the $65 million commitment over the first two years,” Johnson said. “We’ve already started discussing Phase III of our development plan, primarily consisting of the addition of a hotel. This would infuse another $30 million plus into the economy directly while creating still more jobs.”

Fred Jackson, assistant to Jefferson County Judge Jeff Branick, said earlier this week the decision to reject the bid was likely due to statutory requirements not being fulfilled meaning there was no written appraisal for fair market value, only verbal, for the property located off Interstate 10.