CULINARY THRILL SEEKING — What did you save from the freezer? 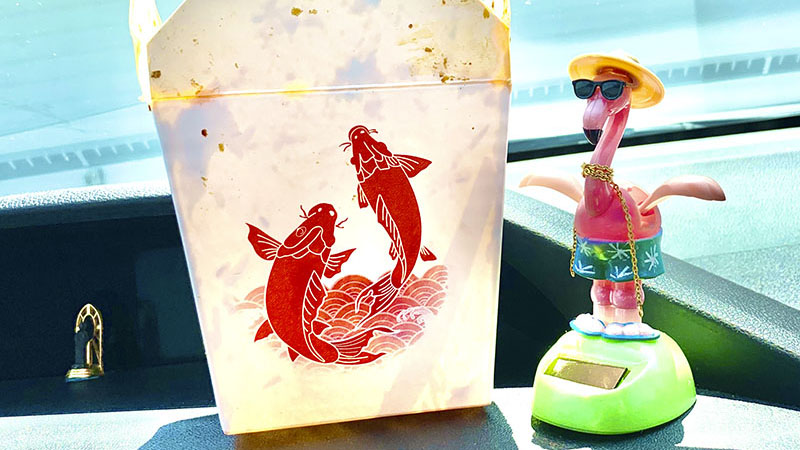 Indian food warmed on the dashboard was an evacuation treat for this Culinary Thrill Seeker. (Darragh Doiron/Special to The News)

I can’t be the only one who worries about saving the fridge/freezer contents when it’s time for an all-too-familiar evacuation.

With all the decisions that must be made quickly, I was pondering a fresh zucchini in my hand and imagining how I could use it on the road.

We were headed to a North Texas relative’s home and the owners would not even be there. What a blessing to be offered this in the midst of pandemic.

I packed what I could with frozen bags of spinach acting like ice packs. This season makes me nervous so I didn’t have a full freezer, but some of that food was sentimental. There were items my mother had prepared. She recently died and I was saving them to share when my sister could visit.

Halfway there I took out some gyros meat and set it to warm on the dashboard. I thought I was pretty clever, but my daughter told me to enjoy my food poisoning. It was NOT there long and it was very good in a similarly warmed tortilla.

Strawberry yogurt became frozen yogurt with fruit and it was also good. A variety of unusual combinations, such as a hamburger patty “short stack” came from our stock we stashed in the cousin’s outside freezer. She repeatedly texted we were welcome to their stock, but we simply could not let this food go.

Glued to Weather Channel updates, we prayed and saw what our neighbors in Louisiana will be dealing with for months. Now’s a time for me to amp up the gratitude and pay good things forward.

Some of those still-frozen vegetables came home and were added to a soup that my daughter made with chicken and vegetables her mother-in-law brought from Buna when she left for Laura.

I’ve heard stories of families who hauled frozen shrimp across Texas when they were evacuating. What is the craziest thing you’ve taken, eaten or heard of when running from a storm?

I’m grateful to all those working to help the area recover. It’s a 2020 heartache, but I’m confident we will all come out fine. That’s my prayer.

My evacuation refuge had a fig tree and the hosts were not around, so I indulged in some fruit so good it is mentioned in the Bible.

Better I enjoy them than the birds, and I love birds. This bush was not very old and laden with fruits.

Harvesting a few of these in North Texas was very different than my memories of picking with my grandma in Texas and Louisiana. Those trees covered more space than a small house, or so it seemed to little me. I was sent in under the canopy to harvest and I remember this “chore” to be scratchy, sticky and very hot.

But, it was worth grandma’s fig preserves on her homemade biscuits. I didn’t know then you could eat them fresh. They probably didn’t tell me so there would be more in the bucket at the end of picking.

Darragh Doiron is a Port Arthur area foodie who may have seen you on the road while evacuating. Share your crazy evacuation stores with her at darraghcastillo@icloud.com