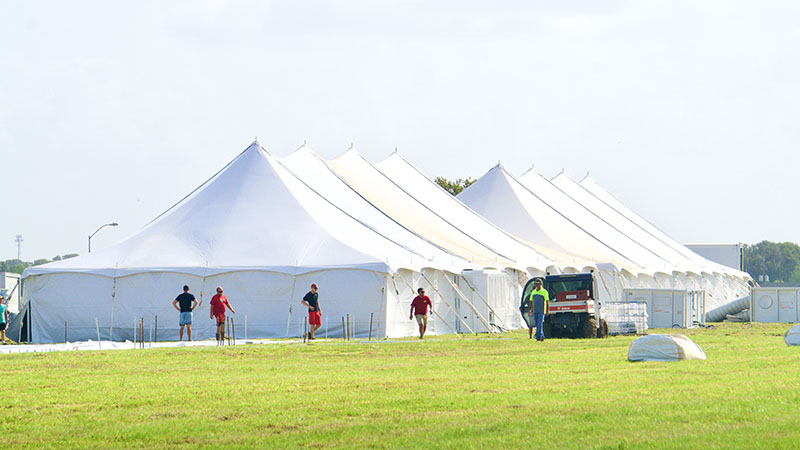 Jack Brooks Regional Airport is being used as staging area to accommodate a thousand Entergy and storm workers still in the area. (Cassandra Jenkins/The News)

Those driving on U.S. 69 northbound may look to their left and see dozens of billowing white-topped tents crowded together in front of the Jack Brooks Regional Airport, and ask, “What are those?”

Thousands of Entergy linemen and storm workers are still in Southeast Texas working to restore power to a community in waiting. Tent city is their reprieve.

“Whenever we have a major storm, we house restoration workers depending on what’s available to them,” she said. “Port Arthur and Mid-County can only accommodate so many workers, so we set up our own base camps, or staging sites.”

The new location can sleep up to 1,000 workers. Personnel are spaced out at least 6 feet apart to comply with COVID-19 guidelines.

“We call it tent city,” Payne said. “It provides a place to sleep, a dining hall and even laundry facilities. People can leave the trucks on sight or be bused from other parking areas.”

Payne said Entergy prides itself on being able to provide for the people who come in and help disaster areas. 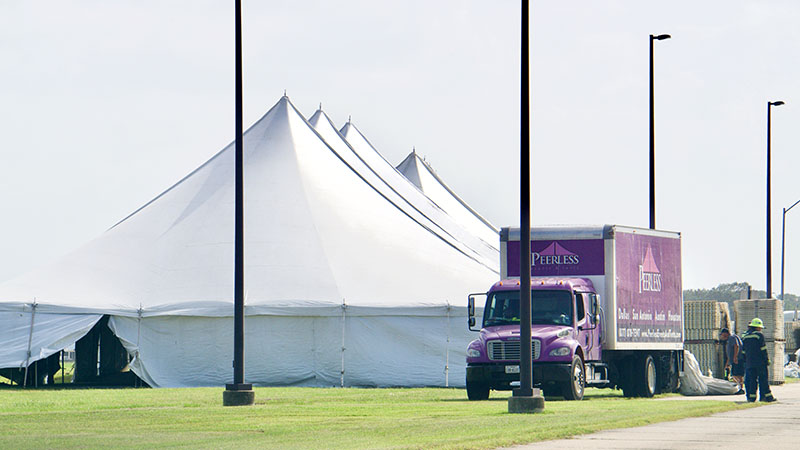 Peerless Events and Tents, a Houston-based company, brought truckloads of tents Wednesday for Entergy to use as a staging area for local workers.

“Even though we are almost done restoring power to these neighborhoods, we are still working in other parts of Southeast Texas,” she said. “Those workers will continue to be in this area, so we will continue to provide for them. I don’t know how long we will be here. We still have some cleanup work, but as long as we need to accommodate workers we can do so.”

“We’ve seen a lot of people in the community buying food or water for the linemen during work,” she said. “We do feed them, but it’s great to see others helping and it speaks to the resiliency of the community that they want to help even during times of disaster. We thank them for all the support they are giving to the people who come from near and far to help.” 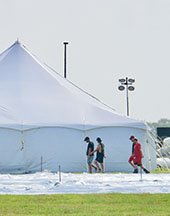 Tents are being set-up to use for multiple purposes including sleeping quarters, a mess hall and laundry facilities.

Groves City Manager D.E. Sosa said despite the halt, 97 percent of Groves received power Tuesday. Only three percent of residents are still in the dark.

“It feels good,” he said. “Entergy has been working around the clock and part of the problem a lot of people don’t understand is that the transmissions are down. It’s like a grid, it’s hard to explain but it’s a balancing act.”

Payne said the majority of residents that are still without power are on or near the distribution site or transmission lines.

Six of the nine major transmission lines that deliver power into the Entergy Texas region from Louisiana are currently out of service.

Despite the statistic, only 1,197 customers were remaining without power at noon Wednesday. Those in the Mid- and South County that can sustain electricity safely are scheduled to receive power by no later than Thursday morning, including Groves.

Sosa said if residents are still without power after tonight, are asked to call the Entergy emergency number at 1-800-368-3749.

“The linemen work hard, and it feels good to have power again,” he said. “These people are our heroes.”