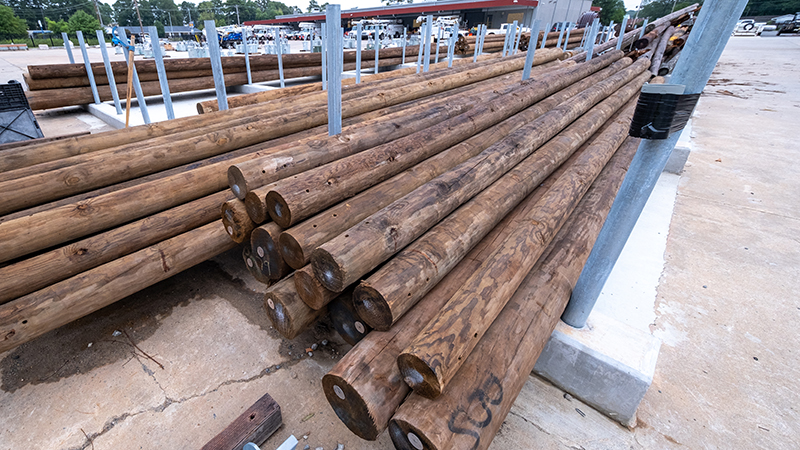 Entergy lines up replacement polls for use during Hurricane Laura restoration process.

As of 7:30 a.m. there were 17,779 customers without power in Groves, Nederland, Port Arthur, Port Neches, Sabine Pass and Taylor Landing.

That number is down from 23,965 reported at 4 p.m. Sunday throughout the same area,

Sunday evening workers restored power to approximately 1,000 customers in the areas of Port Arthur, along Lewis Drive between Jefferson and Memorial; Port Neches along Grigsby; and Nederland between Highway 365 and Helena.

The Entergy large voltage transmission system was severely damaged by the storm and is the cause of many of the outages.

Entergy Texas estimates the majority of the area’s customers, who can safely take power, will be restored today. Due to the transmission power damage, some Groves customers may not be restored until Tuesday.

Several substations in Groves, Port Arthur and Port Neches cannot receive power until that transmission system is repaired. Transmission restoration continues to be a top priority as workers continue to repair the damage.

Entergy Scouts have completed the assessment of these areas and have identified all damaged equipment, that caused the outages. These assessments have identified 79 downed poles, 113 downed spans of wire, 14 damaged transformers and 137 broken crossarms.

Entergy Texas has approximately 1,300 workers assisting in the Port Arthur Network restoration effort, including approximately 1,000 Linemen, 100 Vegetation Workers and 200 Scouts. Restoration personnel are currently working to restore power to all areas that have been impacted.