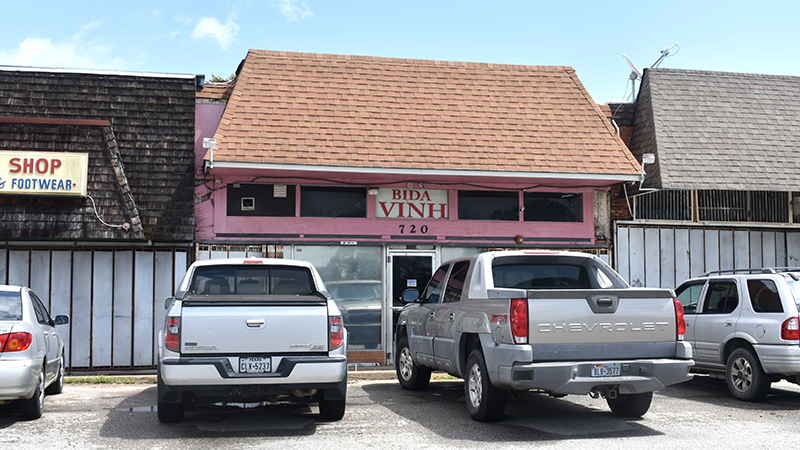 Three bowls of rice, a whole cooked chicken, a can of beer and three cigarettes sat out front of Bida Vinh Pool Hall Monday morning, an offering to the three people who died there Friday from carbon monoxide poisoning.

The pool hall at 720 Ninth Avenue sits in a traditionally Vietnamese area of town. Several men were at the business on Monday to check the air conditioning. They did not give their names but said the bowls of rice and other items were Buddhist offerings to the memory of the deceased, though they do not know who placed the items there.

A total of seven people were staying there and at some point brought a generator inside the building. When emergency workers arrived, three people were outside and one of them was deceased. Four more people were inside and brought out, two of them deceased.

In addition, two Port Arthur Police officers had to be medically evaluated at a hospital because they went inside the building, according to Fountain. 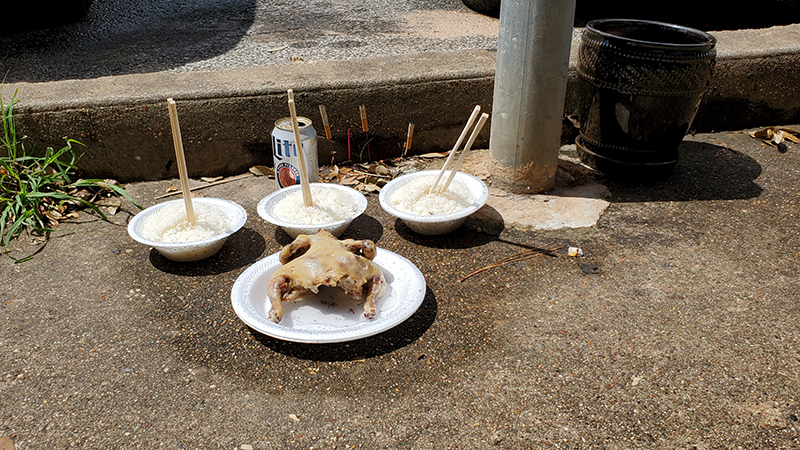 Bowls of rice and other offerings are set out in front of Bida Vinh in honor of the three people who died there from carbon mononxide poisoning related to a generator being used inside the building.

There has been an increase in 911 calls due to carbon monoxide poisoning from generators placed in an unsafe area.

“We are averaging at least one a day where people are putting them (generators) too close to their house,” Fountain said. “We had one this morning where the guy had one six feet from his house right where his AC window unit was sucking exhaust into the house.”

The person at that particular home did not require medical attention, but firefighters registered a low level of carbon monoxide in the home and the man was complaining of nausea and a headache.

“They had put the generator in their home in a new addition they had been building,” Port Neches Fire Chief Paul Nelson said, adding the generator was new. “It was inside the house and it doesn’t take long for a generator to produce a lot of carbon monoxide in the exhaust.”

When firefighters arrived some of the family members were throwing up on the lawn and others were lying on the ground.

Nelson didn’t make their particular call and did not know the conditions of the family members.

That call came in at 1:16 a.m. Friday but there was a call 20 minutes prior at another location about a generator.

In this case the generator was set up too close to a neighbor’s house, and the exhaust was getting into that person’s home. No one was hospitalized.

Nelson did not provide addresses for the affected homes citing HIPAA regulations.

Groves Fire Department Chief Lance Billeaud said his department has also had a number of generator calls including generators too close to a window air conditioning unit or inside a garage where exhaust is pulled into the house.

“And one of the things we’ve seen is with the permanently mounted ones, like the Generac, that are on a lot of the newer homes up inside the attic,” Billeaud said.

Billeaud said these types of generators can pull air from outside through the eaves and disperse it throughout the home.

“We have had to go out on several calls on people not feeling well, bad headaches,” he said. “They call for us. When we get there and see the situation we realize immediately what it is.”

Chief Nelson said generators need to be used in a very open space.

“For example, I had to run mine for about 15 hours the other night and I had it out in the middle of the back yard away from anything,” Nelson said. “You don’t want them underneath a porch, in a garage and certainly don’t want them in a home. Carbon monoxide is lighter than air, which means it is going to rise. If there is an overhang or garage, it will be collected there and kept inside the home and make its way to the space where you are living.”