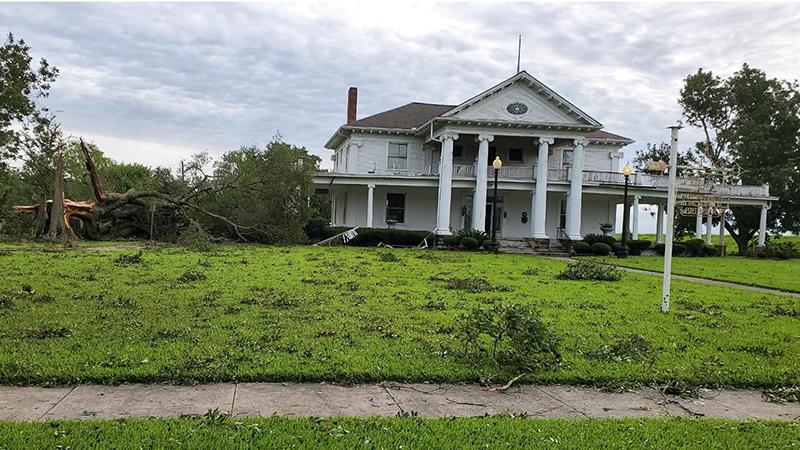 Trees and tree limbs are strewn around Rose Hill Manor on Woodworth Boulevard, near the Port Arthur Seawall, on Thursday morning. (Fernando Ramirez/Special to The News)

Port Arthur and surrounding areas sustained little damage as a result of Hurricane Laura’s arrival early Thursday, according to those who weathered the storm.

And City Manager Ron Burton is encouraging residents to come back, two days after a mandatory evacuation went into effect.

“Come back and restore the city,” Burton said. “Port Arthur is open for business.”

Burton said Port Arthur did not sustain any flooding or any damage that he could witness. He was awaiting a report from the fire department on three fires that occurred in the city.

“Not a drop of flooding,” Burton said, adding he had been driving around the city since 4 a.m. “We have done an amazing job of seeing to it we avoided flooding this time.”

There were also no injuries or deaths to report in the city, Burton added.

“Not a dead cat or a dead dog,” he exclaimed.

Port Arthur is less than a year removed from minimal impact of Tropical Storm Imelda, which brought heavy rain that drained within hours. The city sustained extensive damage from Hurricane Harvey nearly three years ago to the day. The floodwaters from Harvey arrived Aug. 29, 2017, and crested the next day.

Burton credits Port Arthur’s survival of Laura to preparation by the city workers.

“We have been working from the time Harvey hit,” he said. “Especially in the last year, we’ve been working feverishly to make sure our flooding infrastructure has been maintained. We have given it 110 percent.”

“I’m glad the citizens are compliant. Their compliance kept themselves out of harm’s way. All it had to do was make another turn, and it would have hurt Port Arthur.”

Rose Hill Manor, located near the city’s Seawall on Woodworth Boulevard, wasn’t so lucky, according to one resident.

“It was hit pretty bad,” Fernando Ramirez said. “Most of the trees are down and broken. I was just driving by the Seawall, and I got off and saw this, and it is bad.”

Other houses down Lakeshore Drive from Rose Hill were spared, however, by Ramirez’s account.

“Something must have hit where Rose Hill was, but on the other side of the street going toward Lamar [State College Port Arthur], everything was fine,” he said.

Sustained tropical storm force winds were expected to decrease between 8 a.m. and noon for the Interstate 10 corridor and between 10 a.m. and 2 p.m. for east Texas and central Louisiana.

Beaumont photographer Jerome Cabeen noted “a couple” of billboards on U.S. 69 toward Port Arthur were knocked down but could not detect any extensive damage as projected.

“I think we dodged a bullet,” he said.

Cabeen photographed areas of downtown Port Arthur hours before Laura made landfall and noticed the strength of her winds, which were just a fraction of the maximum speed.

“They had to be 35 to 40 miles an hour,” Cabeen said. “A couple of gusts blew me off my balance. It was hard to see, but there were a couple of whitecaps on the waterway. It started to rain.”

Nederland resident and former Holy Cross Lutheran Church Pastor Francis Schroeder said conditions in his neighborhood were looking well at 9:40 a.m. He reported before 8 a.m. that only a few plants were down, debris and tree branches needed picking up and damage was very light to none.

Schroeder, who is the radio play-by-play voice of Port Neches-Groves High School football, installed a weather station at his home. Wind was blowing out of the northeast at 12 mph before 8 a.m., he said.

The façade of Market Basket on 27th Street, near Schroeder’s home, looked intact, and American flags flying outside homes were not torn apart, Schroeder added.

“Laura was what we expected, but for the most part, the Lord blessed us,” Schroeder said. “I expected a mix between Rita and Ike [hurricanes in 2005 and 2008, respectively], basically, catastrophic devastation. I expected roofs to be gone, trees to be uprooted, aluminum carports to be flipped over. Those things are still intact in my neighborhood.”

Bartie rued some citizens might not be happy with his decision to call for evacuation when Port Arthur sustained so little damage.

“I’m still prepared for everyone to be angry with me,” he said. “If you’re going to be a leader, you can’t be afraid. Everybody can voice their own opinion. It’s free speech. I’m good.”

Nonetheless, Burton was ecstatic over the precautions Port Arthur took to beat the weather.

“We have done a damn good job in preparing for this hurricane,” Burton said. “There’s no doubt about that.”

Schroeder guessed that about 60 percent of Nederland residents heeded calls from their city leaders to evacuate and noted plenty of sightseers Thursday morning.

“I’m grateful that we made it through,” Schroeder said. “It could be a whole lot worse. Anytime you get through this, it’s very humbling because of things you and I cannot control.”