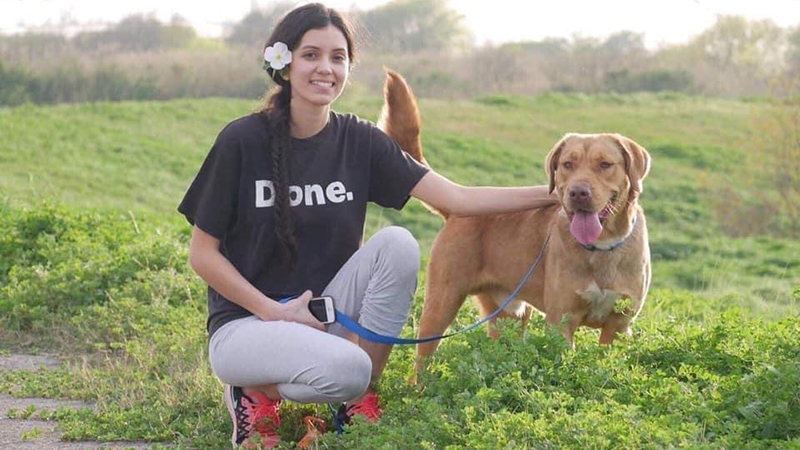 The City of Port Arthur and Mid-County are in the path of what is predicted to be a devastating Category 4 storm.

Hurricane Laura is making landfall late Wednesday night into early Thursday morning and many news stations, emergency management offices and city government officials are urging residents of the Golden Triangle to get out while they can.

For some, following that mandatory evacuation is an impossible task to fill.

Andrea Silverthorne is hunkered down at her home in Groves with 5-year-old Thor, a marbled brown and black brindle dog.

“I have four adults, three children, with one running a fever and teething, and wouldn’t be admitted to a shelter due to the virus mess, oh and a dog,” she said.

Silverthorne sent her two-legged family members to safety, deciding to tough out the storm with Thor by her side.

“I’d never leave my pet to tough it out,” she said. “He’s my son. I carried him through floodwaters in Harvey when I was exhausted, and I would do the same thing now. I’d never leave him behind. He’s my companion 24/7.”

Silverthorne is not the only one who chose to stay behind for her four-legged friend.

Naomi Perez is in a similar situation with her two guard dogs, Goliath and Chewbacca.

“I’ve got four dogs,” Perez said. “Two outside dogs aren’t neutered and get very anxious around other people, so it would be hectic to be at a shelter. I have two dachshunds that would be easier to just get up and leave, but I’d never leave my other two by themselves.”

Perez is staying above a two story church building close by.

“We have a generator, froze a lot of water bottles, filled up a tub with water and we have plenty of canned goods,” she said. “We will be riding out the major part of the hurricane together.”

Other comments filtered in from Port Arthur, Nederland and Port Neches residents show the need for future pet-friendly evacuation plans.

Nederland’s Dolores Hussey said, “Many are staying because they are saying it was almost impossible to find hotels for their dogs, or animals, especially if they have bigger dogs.”

Besides staying to care for animals, others can’t evacuate due to limited funds, medical reasons or are essential workers.

Boogie Kuntz, who works at the Zummo Meat Co. in Beaumont, is considered one of those essential employees.

He will be staying in an apartment complex in Port Neches and praying for the best.

“Like a refinery, we are considered essential as food producers,” he said. “We really can’t leave or if we do, we need to be able to report for work Friday. This apartment complex in Port Neches has weathered every storm since the late 60s and didn’t flood during Harvey. It’s well supplied with non-perishable food, Powerade, water and a generator.”

For Rima Anabtawi, evacuating is not an option. She is her father’s sole caretaker.

“My dad, Dr. Anabtawi, is 89 years old with a hip replacement placed six months ago and he’s undergoing cancer treatments,” she said. “He refuses to leave and I’m his sole caretaker. We’ve ridden out all storms but Rita in arguably the most secure robust residential structure in the county.”

Anabtawi’s house was built by Mr. Burton of Burton Shipyards and is equipped with steel beams in the highest ridge point in Groves.

“Though not the wisest choice given the potential ferocity of this storm and the inevitable grueling aftermath,” she said. “We’ve decided to stay, knowing full well we’ll be ‘on our own’ at least for 24 hours. It is terrifying, no matter how thoroughly one prepares.”

Residents who choose to stay will have access to 9-1-1 but it will be tough for 1st responders to reach residents.

The Cajun Navy, an independent emergency response team, is posted at a hotel in Beaumont. To request help, fill out the form at https://crowdrelief-forms.nogginoca.com.