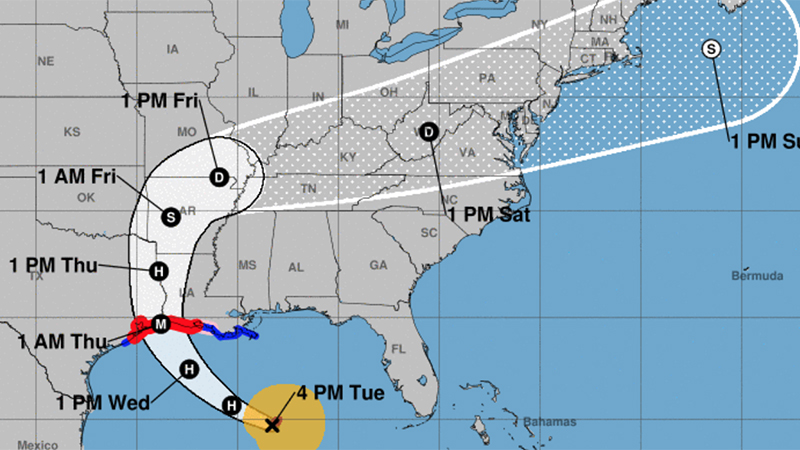 Hurricane Laura has the potential to rapidly intensify over the next 24 hours, according to the National Weather Service.

Jefferson County is under a Hurricane Warning.

The Texas Department of Public Safety, with the assistance of the Texas Department of Transportation, will close the Rainbow and Veterans Bridges when sustained wind speeds reach 44 mph. Access points to both bridges will be closed due to safety concerns for motorists and first responders.

Jefferson is under a storm surge warning, issued when it is believed the water could be three feet deep or more.

Rain totals could come in from four to 12 inches.

There is a chance that the Port Arthur levee system could be topped, weather officials said.

Water levels near the coast are forecast to be 9 to 13 feet above ground level from Sea Rim State Park to Intracoastal City.

Five to ten inches of rain is possible near and to the right of where Laura makes landfall. Locally higher amounts of 15 inches are possible. The timing of this heavy rain is starting Wednesday and continuing into Thursday.

The storm surge forecast is nine to 13 feet above ground level for coastal areas. A storm surge warning is now in effect.

Catastrophic and life threatening flooding is expected across the impacted Gulf Coast.

Hurricane warnings are in effect for all of Southeast Texas and most of southwest Louisiana. Expect widespread power outages, trees downed, homes and businesses damaged.

Rainfall of five to 10 inches with locally 15 inches will cause flooded roads.

This rainfall will have a hard time draining due to the storm surge. Water rescues will likely be required if people are on the road and stay in the area.