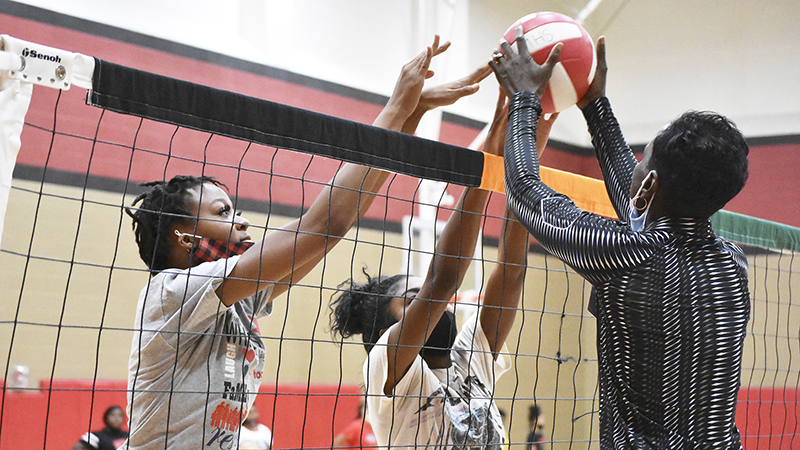 First-year Memorial volleyball head coach Debra Harris would have liked to do without the unexpected pauses to her summer workouts.

“We were shut down twice,” she said, referring to the times her program had to stop summer drills due to a positive coronavirus test of an athlete. “We had to go back and start over again. They were getting down to it, the positioning part, the skills. We had to learn the system and the playbook after having to shut down and come back again.”

Regular volleyball practice won’t begin until Sept. 7, but Harris made phone calls to try and get each of her players to come back to the optional drills.

“When someone catches COVID, we’ll be out a couple of days, so what I do on the side, I’ll still work out and do what I have to do to stay conditioned and fit,” she said.

Harris is the second new head coach in as many seasons, replacing Sommer Lough, and Harris says the Lady Titans face a rebuilding season with only four returning varsity players. Memorial, which was established in 2002, has never qualified for the University Interscholastic League playoffs in its history.

But Harris — who coached Memorial forerunner Thomas Jefferson to a district championship and area-round match in 1999 — thinks the future is bright in Port Arthur.

“I’m working on getting some JV players ready for varsity,” she said. “My freshman team, by the time they get up to varsity, they’re going to be really solid. Skill-wise, they’ve got skills.”

Scott said the Lady Titans have taken to Harris well and feel more comfortable with her.

“She works with us,” Scott said. “She’s been around, and she actually understands we have to work on things instead of going full-in. We actually get time where we can work on stuff on our own.”

Classmate and right-side hitter Ragan Dennis has noticed a difference in her skills under Harris.

“I can now do the slide from middle to right side and my passing has gotten better,” Dennis said.

What’s left for the Lady Titans is getting down the coverage aspects on defense and making it an automatic routine, Harris says. She adds they played the same defensive system that she’s knowledgeable about.

Being able to talk on the court will be key to the Lady Titans’ play, one of their senior outside hitters believes.

Memorial’s volleyball schedule has been shortened to 14 matches, all District 21-5A contests, as the UIL moved the season start to Sept. 14 at the earliest for teams in classes 5A and 6A. Memorial’s first match is scheduled for Sept. 19 at Goose Creek Memorial, but the Lady Titans have a 10-day break before they resume at home against Nederland.

The extra time before the season begins has been beneficial, Scott believes.

“Throughout these days, it was, like, girls who didn’t know how to serve or hit or pass, and from the days that’s been passing by, it gives us more time to improve our skills,” she said.

(All varsity match times, unless otherwise indicated, are 6:30 p.m.; home matches in BOLD; *-indicates 21-5A match)