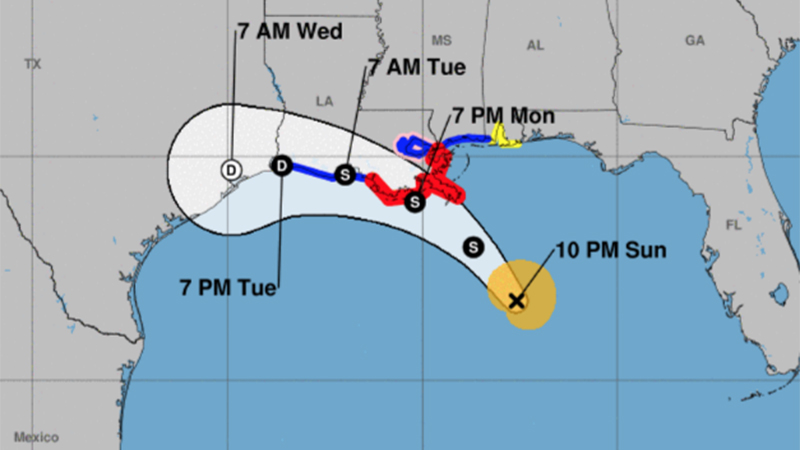 Late Sunday night, the National Weather Service released a county breakdown of expected impacts across the region for Monday into Tuesday from Tropical Storm Marco. 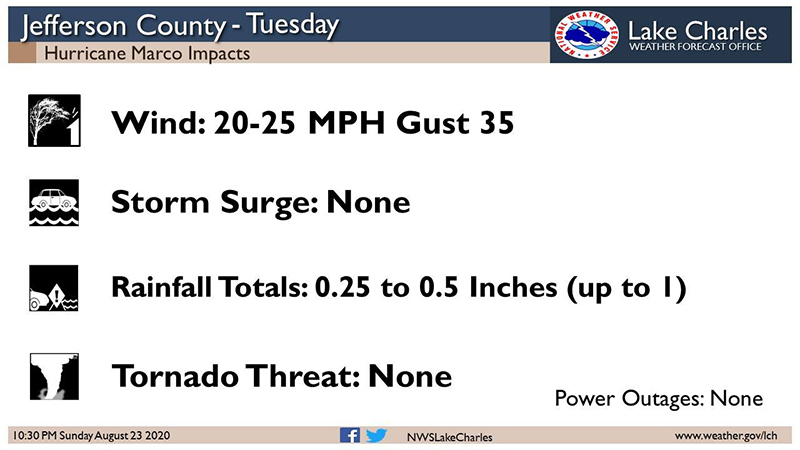 Jefferson County was expected to see winds between 20 and 25 mph, with gusts of 35 mph.

There is not expected to be an elevated storm surge or tornado threat.

The rain amount is forecasted to be between .25 and .5 inches.

Marco weakened to a tropical storm as it neared southeast Louisiana on Monday with move west across southern Louisiana or the adjacent coastal waters.

Laura still has a large spread for landfall forecasts – anywhere from Southeast Texas (Thursday) to southeast Louisiana (Wednesday), potentially as a major hurricane.

The forecast for Marco impacts across the Gulf Coast follows:

Winds: Tropical Storm force wind gusts could occur from Cameron, LA eastward along the coast, possibly extending inland to the I-10 corridor.

The timing would be in the late Monday-early Tuesday time frame for south central Louisiana and during the day Tuesday for southwest Louisiana.

Storm Surge: Water 1 to 3 ft above ground level is possible for the southwest and south central Louisiana coast, in the late Monday-Tuesday time frame.

Rainfall: Depending on where the rain bands form, local amounts of 2 to 4 inches are possible Tuesday.

The forecast for Laura impacts across the Gulf Coast follows:

Winds: Hurricane force winds will be possible across the region starting late Wednesday and continuing Thursday.