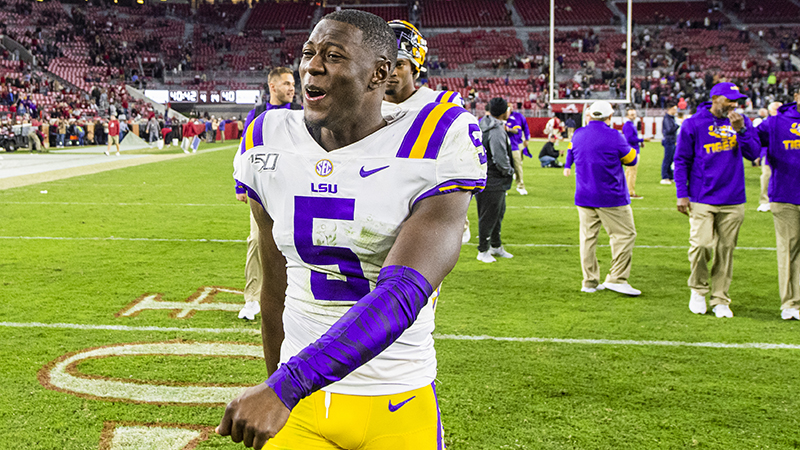 Kary Vincent Jr. could barely fit in the time for our phone conversation when we spoke in the Spring.

The former Memorial High School athletic whiz was fresh off a trip to the White House and preparing hardcore for a 2020 track season with goals of Southeastern Conference and National Championship glory.

You can’t even fault the Port Arthur native for his grand dreams. They were par for the course for an accomplished student-athlete.

Of course, bear in mind, when Kary and I talked it was late February and those living comfortably in the United States were barely even aware of COVID-19.

The 2017 graduate of Memorial chose not to enter his name into the 2020 NFL draft, instead choosing to compete another year for the LSU track & field team and focus on a senior fall campaign as a member of the defending champion Tigers football team.

As you all know, COVID-19 struck. The Spring track season was canceled and this fall’s football season was thrown into serious doubt.

Kary was forced to make a decision, and he shared it with the country on Monday, declaring his intention to opt out of his senior season at LSU and focus on preparing for the 2021 NFL draft.

His statement read in part, “With thoughtful prayer and lengthy discussions with my family, we feel that it is in my best interest to opt out of my final year at LSU and begin training for the NFL Combine. I have worked long and hard for the opportunity to play in the NFL. I’m humbled and excited about attacking this next challenge with humility, integrity and dignity.”

His words struck me as so different than our conversation six months ago, when a world of possibilities felt more like probabilities.

Kary had plans to lead his track team to glory, then follow that up with another championship run on the gridiron, this time as a senior leader.

In February he told me, “I have been part of the (LSU) track team for three years. We’ve won SEC titles and individual SEC championships and we’ve made it to nationals every year. And every year something out-of-the-ordinary happens. This year, my last year, I’m trying to change the narrative of that. We’ve got to win a national championship in track, as well.”

And about playing football as a college senior, he said “It’s simple. I have to step up and be a leader for this team. That is a role I think that has really suited me over time. There are guys on the team that really look up to me, and I know we have to do ten times more than what we did last year to get where we want to get. That is another championship. We know what it takes. We just have to do it.”

None of what happened in the months since that conversation changes the person he is or the nature of his best intentions. In fact, I don’t fault him even a little bit for deciding to skip his senior football season.

However, it is a reminder for all the young people of Southeast Texas playing football and dreaming of glory days that will never end to be mindful that the world and the opportunities it presents can change in the drop of a dime.

They’ve all got similar ambitions as Kary Vincent Jr. and maybe a couple might actually match his talent, but this year proves one thing. You are better off cherishing what you have, because there is no promise for tomorrow.

Stephen Hemelt is president of Port Arthur Newsmedia. He can be reached at stephen.hemelt@panews.com or 409-728-1007.