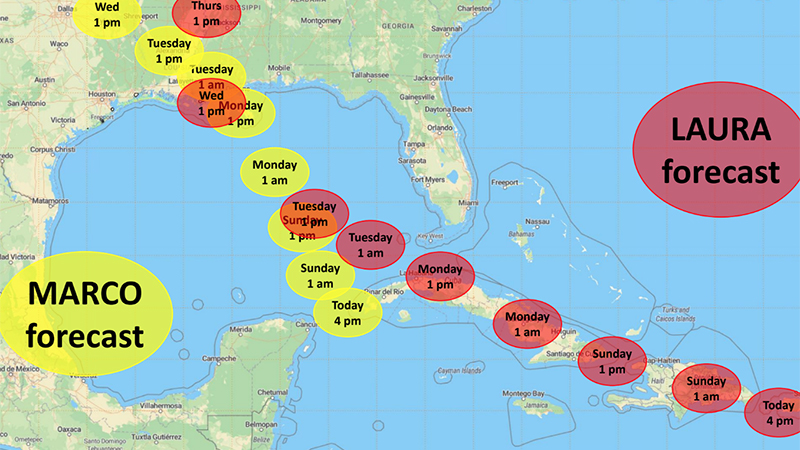 For those who stay west of the two systems, their weather will not be as bad if they were east of these two systems.

Tropical Storm Marco could become a hurricane soon. It is forecast to be in the southern Gulf of Mexico Saturday night and threaten Louisiana Monday into Tuesday as a category one hurricane.

Tropical Storm Laura is moving across the larger islands of the Caribbean, so it isn’t expected to strengthen until it gets in the southeastern Gulf of Mexico late Monday.

It will become a hurricane in the Gulf and threaten Louisiana by Wednesday.

The National Weather Service stresses it is too early to have confidence on where the two storms will make landfall, so the following impact points are likely going to be changing over the next few days.

Winds: Hurricane force winds could occur from Intracoastal City, LA eastward along the coast, with tropical storm force winds extending inland. The timing would be in the Monday-Wednesday time frame.

Storm Surge: Water 2 to 4 ft above ground level is possible for the Louisiana coast, in the Monday-Wednesday time frame.

Rainfall: Depending on how fast the tropical systems are moving, and where they make landfall, rainfall totals could be in the 5 to 10 inch range.