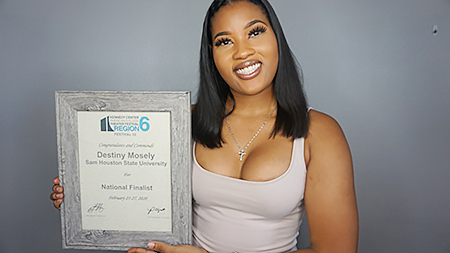 Destiny Mosely is representing Port Arthur in a big way.

The Sam Houston State University junior became the first African American woman in the school’s history to win the Irene Ryan Acting Scholarship this summer. Mosely said the honor and title is for more than just herself.

“To the young Black girls who enter the department at Sam Houston, this title is for them,” she said in her acceptance speech. “It’s to show them that nothing is impossible, and the unachievable can be achieved. Having this title does not mean the work is over, but it’s a pretty good start.” 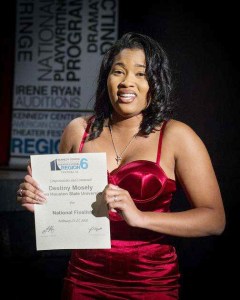 The Irene Ryan Foundation awards 16 regional and two national scholarships annually. As one of the regional finalists, Mosely receives financial assistance and an invitation to the University Resident Theatre Association’s national festival.

Mosely said it’s an accomplishment she wanted for a long time.

“It takes a long process to get to the competition,” she said. “You have to be cast to the show, then you have to be nominated and that takes a long time, too. When I finally won, I definitely took a moment to breathe it in. It’s a feeling I can’t even explain, but it was one of the best moments of my life.”

The 22-year-old’s passion for acting goes back to 10th grade.

“When I realized I was good at it and it was something I wouldn’t fail at, that’s when I knew that this was it,” she said. “This is what I am supposed to be doing.”

Mosely’s love for the art started at Memorial High School under the direction of acting coach Henrietta Haynes.

Haynes said it’s an honor to see one of her former pupil’s rising in the ranks.

“It’s exciting,” she said. “It’s thrilling and I am extremely proud of her. Despite hearing the word no, your yes is out there and her accomplishment will motivate other students to follow in her footsteps.”

Haynes said she saw Mosely’s potential from the beginning.

“I always say that the seed looks nothing like what it will become,” she said. “Mosely had the potential in her, and sometimes it comes down to directors and teachers to motivate and encourage what you see in them to be the best person they can be, not only in theatre but in society. There is no limit to what you can do. You have to believe in yourself and work hard at it, but you can accomplish any goal you want in life. Mosely set that example.“

Her favorite role was playing Beneatha Younger in Lorraine Hansberry’s “A Raisin in the Sun.”

The play, whose title originated from the poem “Harlem” by Langston Hughes, became a Broadway production in 1959.

Beneatha is a 20-year-old college student with dreams of becoming a doctor. As one of the most educated members of the family, she holds modern views on gender and shows great interest in her African heritage.

Mosely said she learned a lot about herself through the eyes of Beneatha.

“I had the time of my life on that stage, learning about myself and growing as an actor, which is why it’s ultimately my favorite,” she said.

Despite the glamor, Mosley said the life of a college acting major is also a busy, stressful one.

“It’s a lot of school, work and rehearsals,” she said. “It’s the busiest life. You never get to sit down, and when you do, it’s to go over lines, listen to rehearsals or figure out your work schedule.”

Another moment of truth came for Mosely earlier this year. In January she fell down a flight of stairs, tearing her meniscus a month before competition.

At that moment, she thought her career might be over.

Mosely is now going into her senior year healthy and whole with new dreams.

“My goal is to keep pursuing this degree,” she said. “My dream is to move to Atlanta. They have a very good outlook and take on Black actors. The film world is evolving and that’s where I want to be.”

Her only advice to other budding actors: Keep at it.

“If it’s what you like to do, if it’s your outlet and something you’re good at, keep at it,” she said. “Get through it and God will show you what He can do. In the end, it all works out in your favor and it will. You just have to put in the work.”

Alongside the Irene Ryan Scholarship, Mosely also holds the VASTA Award for Vocal Excellence from URTA and two best actress awards for a 10-minute play.

She was nominated twice for the Irene Ryan Award before being selected. Mosely will participate in the national performance in 2021.