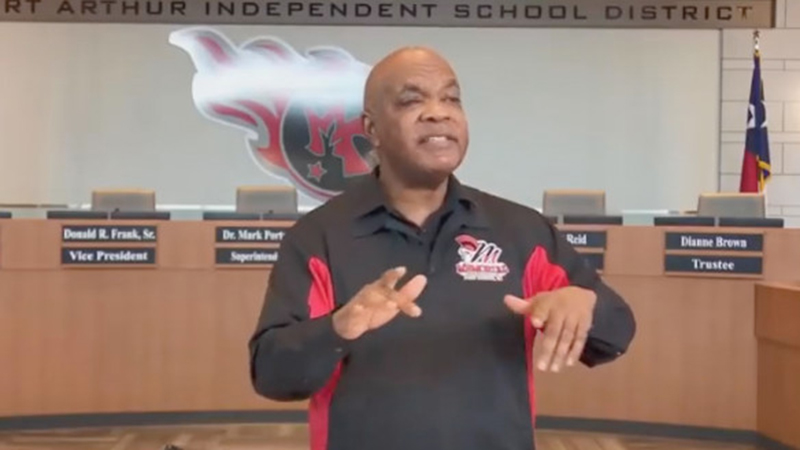 The song and video are part of the Port Arthur Independent School District’s virtual convocation on Monday. In the video, Wagner, dressed in school colors, removes a baseball cap and Memorial Titan facemask before launching into the song.

You can’t stop us

You can’t stop us”

The story behind the song

The PAISD School Anthem, on which the new song is based, came out last year in recognition of the school district’s 120th anniversary. The district typically goes to Wagner for his talent, and this year fine arts supervisor Mollyn Cole asked Wagner to come up with a song, asking him to personalize it with the pandemic.

“I had to think and pray,” Wagner said. “I didn’t have time to create a new melody and thought, what lyrics can I put to the old melody. So little by little I jotted down lines. It took me about three days to get it.”

But there is a backstory or two.

“Even before she asked me, my co-worker Trent Johnson (former band director, now assistant principal) contacted me during the pandemic,” he said, adding Johnson is also associate minister at Rock Island Baptist Church. “He said why don’t you create a song about COVID with a spiritual twist, about how it is not overtaking us.”

So, the idea of a special song was already on the burner.

Let’s go back a bit further.

The previous year Wagner collaborated with 2018 Memorial High School graduates Marcus Tezeno and Tharen Robertson for the song celebrating the district’s anniversary. He wanted something upbeat and modern that would appeal to the young.

Wagner praised the former students’ work and talent and now the remix is getting rave reviews on social media.

“This is something our district needed to hear,” he said. “It’s upbeat, positive and everything we needed to hear to kick the new school year off.”

Teachers in the district returned to work Wednesday. The first day of school for teachers and students is Tuesday, Aug. 18.

The first four weeks will be virtual instruction with the possibility to extend.

Wagner just completed his 45th year as an educator and, in some cases, is working on his third generation of students.

“Some of their grandparents were my kids when both of us were young,” he said. “Me, fresh out of college, and they were freshmen or sophomores. But mostly I’m on my second generation of students. I’m enjoying it as much as I did my first year as an educator, if not more so.”