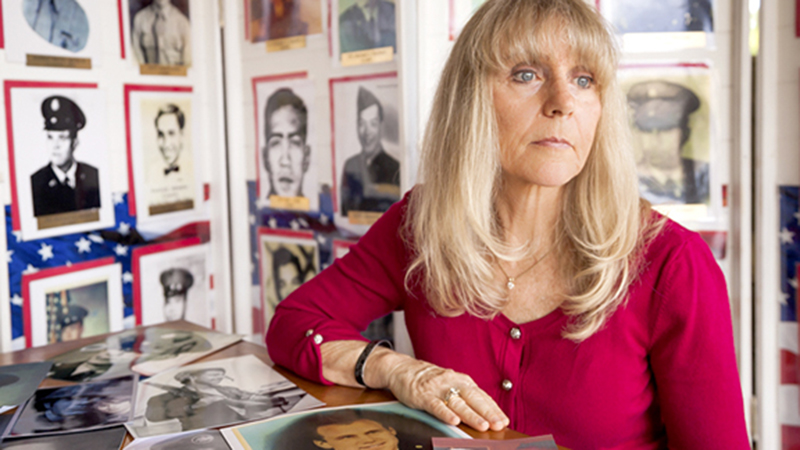 Janna Hoehn has collected more than 7,000 photos of those fallen in the Vietnam War since 2011. (Sue Hudelson/Special to The News)

A volunteer with the Vietnam Veterans Memorial Fund is searching for high-quality photos of 12 Jefferson County soldiers who were killed in the Vietnam War, including four from Port Arthur and another from Groves.

Janna Hoehn said the goal of the fund’s Wall of Faces online memorial is to put a face to each of the 58,315 names that are on the Vietnam Veterans Memorial Wall located in Washington, D.C.

“Putting a face with a name changes the whole dynamic of the wall,” said Hoehn, a California native who has resided on Maui, Hawaii, for 28 years. “It keeps our fallen heroes’ memories alive and will honor them, our heroes’ stories and sacrifice will never be forgotten.”

Hoehn counted 59 Vietnam War casualties from Jefferson County but is looking for high-quality or high-resolution photos for 12 of them from their latter years. One of the soldiers, Danny Ray Northcutt of Port Arthur, who served in the Army, was born July 14, 1948, and died Feb. 2, 1968.

A photo of Northcutt from his boyhood is posted on the Wall of Faces’ website (vvmf.org/thewall), but Hoehn said that is too young of a face to be the main photo. She requests something such as a photo from high school (likely between 1962-66), basic training or from the family of an older Northcutt.

Hoehn and her husband first visited the wall in Washington eight years ago. They chose that monument first because the Vietnam War was going on while Hoehn was in high school.

“Even though I never knew anyone killed in Vietnam, I wanted a rubbing of one of the names,” she said. “I approached the wall and chose a name … Gregory John Crossman … an MIA [missing in action]. When I returned home, I decided to research Gregory and try to find his family, in the event they were never able to go to the wall. I would send them the etching, hoping they would share a photo with me of Gregory.”

After six months off-and-on of trying, with the help of her cousin, her family’s historian, Hoehn found a college photo of Crossman. She donated it in response to a request for photos from the Vietnam Veterans Memorial Fund.

Since then, Hoehn has been an active volunteer in searching for photos for the Wall of Faces, which she said has collected more than 53,000 photos.

“I am also looking for an individual that would like to volunteer to be my ‘boots on the ground’ in your community if we do not find all the photos,” Hoehn said. “It may mean a trip to the library to search for obituaries or to a high school to look through yearbooks.”

To submit any photos or information, email Hoehn at neverforgotten2014@gmail.com.