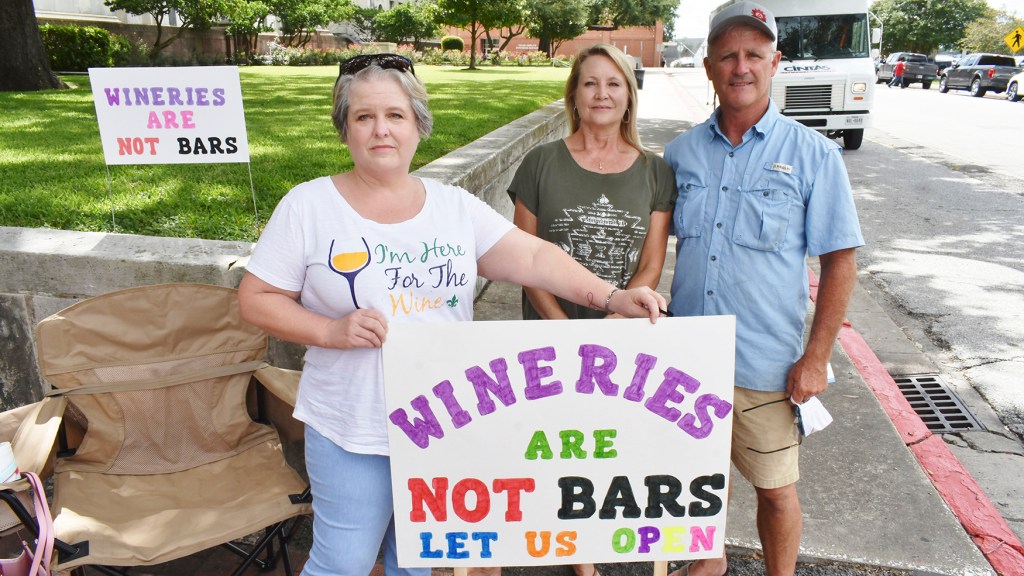 BEAUMONT — Winemakers Traci Tucker, Clay Rollins and Stacy Rollins took an early seat just outside the Jefferson County Courthouse on Tuesday afternoon in hopes of getting the attention of a governor giving a briefing on the state’s coronavirus response inside.

Their message, among other protesters, was simple: Let the alcohol-selling businesses reopen during this pandemic.

For Tucker, who owns Cotton Creek Winery in Beaumont, business has been anything but booming in the city nicknamed “Boomtown.” Her establishment on Phelan Boulevard, along with the Rollins couple’s Vine 2 Wine vineyard in Jefferson County (with a Winnie address) have struggled to stay afloat under Gov. Greg Abbott’s measures to limit and reopen certain businesses in an effort to limit the spread of COVID-19 and keep the state’s economy moving.

Establishments in which alcohol sales exceed 51 percent of the total revenue have been classified as bars and deemed unessential business. Abbott shut down such businesses twice since the pandemic began in March.

But Tucker argues Abbott’s reasoning while fighting for the viability of her business.

Tucker considers Cotton Creek Winery a boutique winery because it’s a small producer of wine and doesn’t have a vineyard. (It receives pre-crushed grapes, she added.)

But on June 26, Abbott issued an order shutting down establishments that hold a permit from the Texas Alcoholic Beverage Commission and are not restaurants whose alcohol sales are less than 51 percent of the total revenue. Those businesses were allowed to reopen at up to 25 percent capacity on May 18.

Abbott rolled out his reopening plan April 27, but bars were to remain closed.

“The first time we were closed down, it was March 18,” Stacy Rollins said. “They opened us up for about two weeks and they closed us back down again, so we have been suffering greatly.”

Stacy Rollins added she heard Vine 2 Wine could be allowed to reopen as a restaurant if it served food, but she and her husband want their business to remain a winery.

“The whole funny thing about what they’re doing is that we can’t open as a winery, but if we do a food business and food sales are 51 percent of the business, we can open,” Clay Rollins said. “What does the food have to do with COVID? They’re saying we can get COVID if we’re just having wine, but if you have food, then you can’t get it. It’s silly.”

Inside the courthouse, Abbott sympathized with all businesses that have struggled during the pandemic.

“They are struggling to pay bills and put food on the table,” he said, seated between Jefferson County Judge Jeff Branick and Beaumont Mayor Becky Ames. But he added an increase in the number of coronavirus cases in Texas led to the necessity of closing down.

Abbott said he would like to see the positivity rate among tests for COVID-19 fall “well below” 10 percent before he would consider moving to a third phase of his reopening plan. The most recent seven-day moving average of positive tests in Texas has increased to 24.2 percent.

“If we’re in a situation where we can get back to the May rate of low hospitalization rates … if all operators of bars and restaurants and similar establishments were to follow the same protocols that require patrons at bars to remain seated and not walk around and converse in small gatherings, that could lead to the reopening,” Abbott said. “The fact is, the way bars are arranged, they are made for people to come close together. … They lack the discipline needed to social distance.”