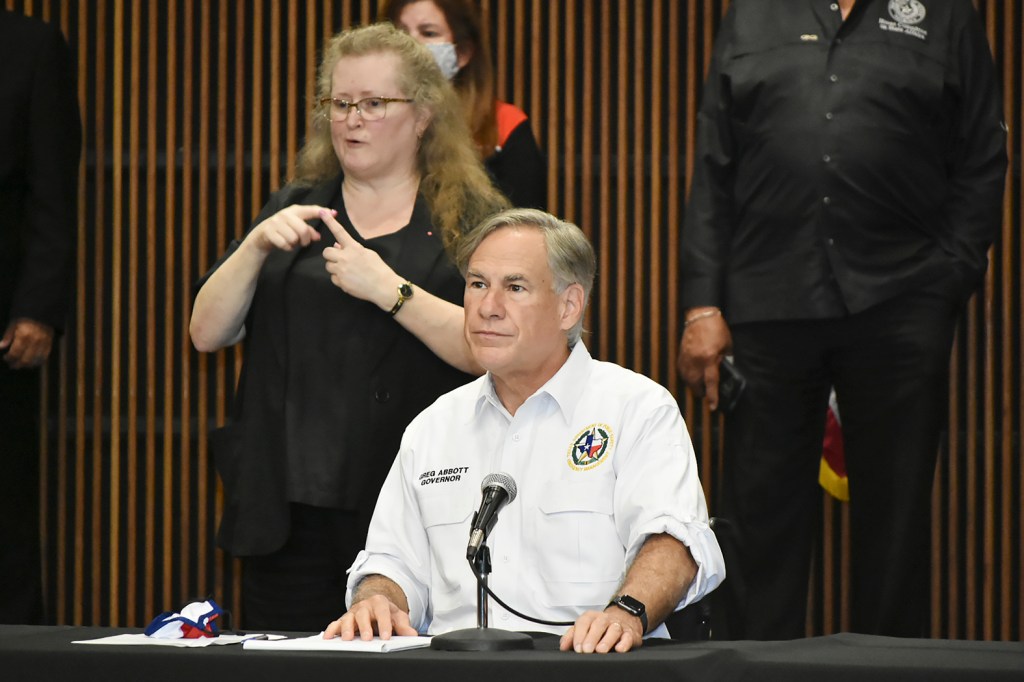 BEAUMONT — As three more Port Arthur and Nederland residents succumbed to coronavirus Tuesday, Texas Gov. Greg Abbott acknowledged the improvement of the average number of coronavirus cases in Southeast Texas and across the state. 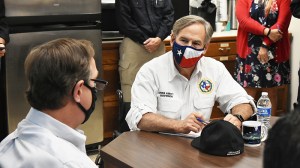 The 14-day average for coronavirus cases in Jefferson County has continuously trended downward since the end of July, according to data from County Judge Jeff Branick.

The single-day number of cases in the county has not surpassed 100 since Aug. 4.

For the four-city Port Arthur Health Department service area, the 14-day trend took a small jump from 20 going into the weekend. The highest average neared 40 on about July 23.

“Even though the numbers have improved, COVID-19 has not left Jefferson County, Orange County or the state of Texas,” Abbott said during an afternoon news conference in the jury impanelling auditorium. “COVID-19 spreads through the state of Texas just as fast as it did in July.”

The announcements of five coronavirus-related deaths in Port Arthur and Nederland over the past two days seemingly underlined Abbott’s concerns.

The health department on Monday said a 65- to 70-year-old Hispanic male and 75- to 80-year-old African American male died from COVID-19. Port Arthur now has 19 COVID-related deaths and Nederland has six. 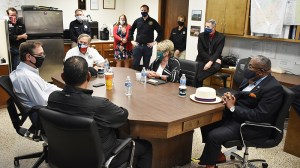 Still, Abbott praised the efforts of citizens doing their parts to lower the daily infection rate by wearing facemasks, staying at home as frequently as possible, using hand sanitizer and washing hands.

That, he said, helps reduce the number of people hospitalized in Jefferson County.

“I understand it’s been a difficult time, that humans by nature are social animals,” said Branick, who flanked Abbott at the conference dais. “We are hopeful we can persevere. We’re seeing a lot of the infections coming online are from backyard parties and social gatherings. We want people to remain diligent in social distancing, wearing masks and using proper hygiene.”

Abbott touted the donations of blood and plasma throughout Texas as treatment for those battling coronavirus and solicited for more of them.

As local school districts kick off the school year next week, Abbott assured that the state is working through Texas Department of Emergency Management Chief Nim Kidd to provide personal protective equipment to campuses. So far in Jefferson County, Abbott said, 150,000 masks and 4,000-plus gallons of hand sanitizer have been distributed to local school districts.

Asked about the Port Neches-Groves Independent School District’s decision to not offer a virtual learning operation for the start of classes, Abbott responded it was best to leave the decision on how and when to open to local districts as each has a different goal for opening.

“One of the ways to empower teachers the most is to have a decision-making process in a district level,” Abbott said. “That is where a teacher is most heard. What I have observed across the state is superintendents are listening to teachers and their concerns across the state. … In addition, if any student or teacher tests positive in a school setting, a school district will be able to shut down to be sanitized and stabilized.”

Abbott addressed the ongoing debate over whether college athletic programs and their conferences should begin competition this fall amid the pandemic.

Abbott said he met with major-college athletic directors and university presidents about a month ago regarding competition.

Some student-athletes have decided to opt out of the season, although many more have come out in support of playing.

Abbott headed to Victoria for another news conference after speaking in Jefferson County.