Take a stroll along Bulldog Stadium’s turf field, which is nearing completion 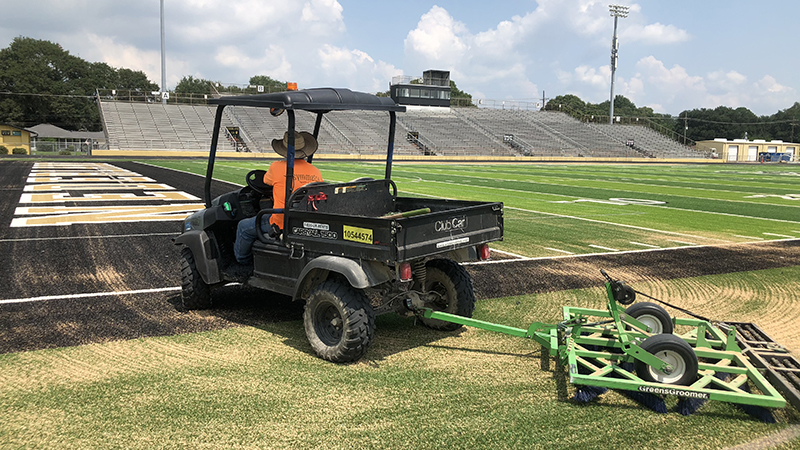 H.B Neild workers will drive over the turf field many more times next week to pack down the BrockFILL infill. (Brad Robichaux/The News)

On normal fields, the dirt is there first, and then the grass grows on top. 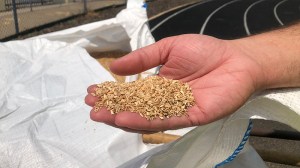 The BrockFILL infill is a sawdust-like material that will be packed down into the turf field.

For Bulldog Stadium’s new turf field, though, it’s the opposite, so to speak.

The Stadium’s new turf field is nearing completion of its installation process. The green turf grass is already in place, and contracting firm H.B. Neild took Friday and will take likely much of this week to put down the “infill,” a material that is packed down into the turf.

This BrockFILL material is different from the normal black pellet infill of other turf fields. It’s designed to help keep the field cooler by retaining enough moisture to allow for cooling through evaporation. This can do wonders for player comfort, Nederland athletic trainer Matt Lewis said.

Ira Bean, H.B. Neild project manager said that several layers underneath the turf work together to contribute to the field’s softness. 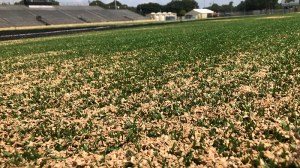 “It’s pretty soft,” he said. “There’s a layer of rock, and then a layer of a foam pad, and then the turf is on top of the foam pad, which is basically like a carpet. Then they put the infill in, and a lot of the softness and the safety factor comes from the infill.”

The BrockFILL material also helps lower the field’s impact score, reducing the likelihood of injuries to players and helping the field last longer.

Workers will pass a tractor across the field next week over and over again to pack more of the infill down, Bean said.
“Towards the end of next week we’re going to be out of here, so it’ll probably be another couple of days of this dragging,” he said. “There’s more bags, so I’m assuming all of that has to go in there as well. There’s quite a bit of it more. Sometimes they get a little extra material that may not go in.”

The field already sports its yard lines, numbers and the big “N” Nederland logo in the center. These parts aren’t painted onto the green turf, either.

“This is glued in,” Bean said. “They actually come in and they cut this material, they cut the green grass out, and they lay this out and they glue it in. The big “N,” the hash marks, the numbers, it’s actually black and white grass. They just lay it out.”
Between the lines, the alternating shades of green for the grass is more of an aesthetic choice on the part of NISD, Bean said.

“It’s a preference the district wanted,” he said. “It obviously makes it easier to tell the yardage, but it’s not a function. It’s more of a style. I think it looks great.” 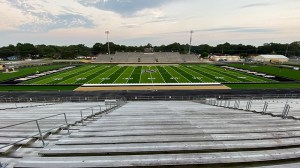 The alternating shades of green used for the field are a stylistic choice on the part of NISD. (Courtesy of H.B. Neild)

The new turf field also boasts a new drainage system underneath. Below the turf a bathtub-like liner helps collect rain water, then trenches guide the water to perforated conduits that run all across the field and round it, draining everything into a city storm drain.

It’s a far cry from what Nederland players may remember of the old dirt field during wet weather.

“It had some drainage, but nothing like this,” Bean said. “It’s all buried underneath.”

Before finishing up on schedule on Aug. 14, one of the last things for H.B. Neild to do will be to install some new uprights, which will be anchored in the ground with a concrete foundation.

After that, the remainder of the renovations at Bulldog Stadium will likely take place well after the end of the football season. 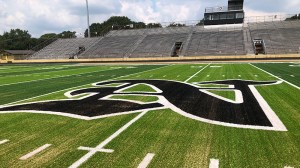 The Nederalnd “N” logo, the hashmarks and numbers are not painted. They are made of black and white grass glued into areas of the turf that have been cut out for them.

“We’ll rebid on all of that and then we’ll go back,” Bean said. “We probably wouldn’t start in December if we were to start again. It would probably be closer to March when we do start again.”

Still up on the drawing board are plans to renovate the bleachers, press box, restrooms and ensure Americans with Disabilities Act compliance.

Plans made so far for the press box will include an expansion in size along with restrooms, air-conditioning and elevators.

Work on the public restrooms will also involve expansion to accommodate greater capacity.

Platforms, aisles and stairs will be widened in the bleachers to help better fall within ADA requirements, and extra space will also better accommodate wheelchair access.