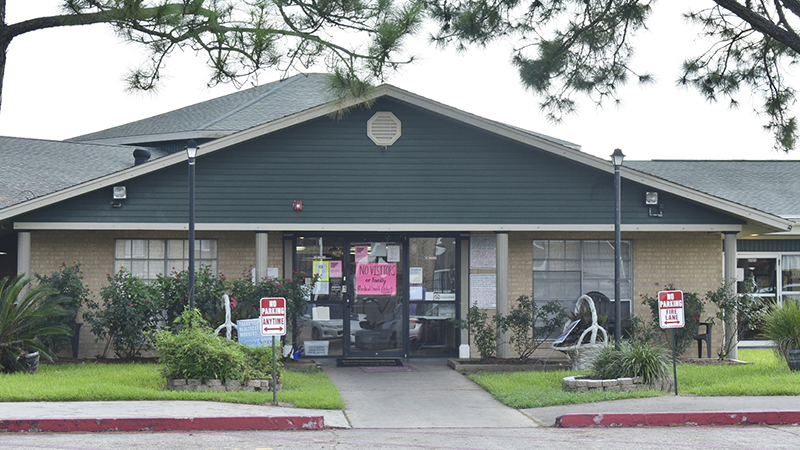 An investigation into a Port Arthur nursing facility by the Texas Health and Human Services Commission found that the facility placed 20 residents and facility staff members at risk for harm from coronavirus within weeks of the disease being declared a pandemic.

Senior Rehabilitation & Skilled Nursing Center, located off FM 365 at 8825 Lamplighter Lane, was found out of compliance with coronavirus infection control, as well as administration or state and local regulations, according to the probe from March 31-April 3, according to documents provided to Port Arthur Newsmedia by the Health and Human Services Commission under the Texas Freedom of Information Act.

Related documents were sent 30 days after the commission informed The News the request was believed to be confidential under Texas Government Code.

The investigation was in response to a complaint, although it was unclear who launched the complaint.

The investigation began March 31, almost three weeks after the World Health Organization declared coronavirus a pandemic. HHSC investigators determined the facility was “not in compliance with federal requirements related to the complaint and implementing proper infection prevention and control practices to prevent the development and transmission of COVID-19.”

The facility was found to have put 20 residents and facility staff members at risk for harm from coronavirus.

Senior Rehabilitation was found to have violated state health code regarding administration in that it “failed to effectively and efficiently administer in a manner that enabled it to use its resources to maintain the highest practicable physical, mental and psychosocial well-being for residents.”

According to the investigation, the administrator did not follow facility policy, which is adopted from Centers for Disease Control and Prevention guidelines and recommendations, and implement interventions to prevent the spread of COVID-19.

“The administrator directed RN [registered nurse] A, who was tested for COVID-19, to work 3 shifts on the [redacted] unit (20 residents) prior to receiving her test results, which were positive,” a finding reads on a statement of deficiencies and plan of correction form.

“RN A had a physician’s order to stay home until further notice due to being tested for COVID-19. The administrator did not require RN A to wear a mask and gloves while providing care when she returned to work prior to receiving the results of the COVID-19 test.”

The names of facility officials and employees were not listed in the documents. Andy Hill is listed as the administrator on Southwest LTC’s website, with Elisa Pensado listed as a director of nursing.

The findings detailed that the administrator told investigators the nurse gave him a physician’s letter indicating she could return to work after seven days if she was asymptomatic following the positive test, the date of which was redacted. The nurse, whom the administrator reported had a history of calling in sick, worked March 24, 25 and 26 on the unit. Sixteen staff members had direct contact with RN A and were quarantined to their residences for 14 days, per the local health department, investigators determined. (The allowances for returning to work were updated as of April 10 to after 17 days of quarantine from the time of last exposure and being asymptomatic.)

All residents were monitored for signs and symptoms via respiratory function (pulse oximetry) and temperature. An isolation wing was designated for residents who showed any signs.

The nurse told investigators she was informed by the facility she would be fired if she did not work. She added she was not told to wear a mask or any other PPE when she returned March 24, but she used only gloves when checking blood sugars.

The health department that was informed of the nurse’s positive test told her she had to stay off work for 21 days and have two negative tests before she could return.

The medical assistant at the nurse’s physician office told investigators on March 31 RN A had complained of fever and symptoms “off and on” for three days, including a cough and sore throat, and tested for the flu and strep throat, both results of which were negative.

The MA then told investigators she typed a letter from the physician indicating RN A was to remain home and off work for seven days or until further notice, just in case the results took longer.

An assistant director of nurses, known as “ADON B” in the documents and who was the staffing coordinator, told investigators she called RN A’s physician office the day before she was scheduled to work and was informed the results from the COVID-19 test were not back and the nurse was to remain off work.

ADON B said she told the administrator, who then called RN A and told her she needed to show up for work.

The administrator told investigators RN A informed him she had not had any symptoms and told her to return to work. He added he thought if she was asymptomatic for seven days, she was able to work, citing information from CDC guidelines.

“He said he knows now that was a mistake and he was using the information for an employee who had not been tested,” investigators said. “He said he was not told RN A’s physician said she could not return to work until her COVID-19 test result was back.”

An observation at 12:43 p.m. April 1, according to findings, revealed residents in a unit, the name of which is redacted, were noted in the “hallway, dining area,” near the medication cart and in the smoking area with no PPE and without social distancing.

The vice president of clinical services for Southwest LTC told investigators on April 2 one resident was moved to another hall due to a temperature that was redacted and was tested for flu and strep, but the results were not back. The next day, the VP — identified as Michelle Lair in a March 31 online article of The News — said a resident had a spiked temperature and a cough, and was moved to a different hall and tested for strep and flu.

The News reported on March 31 an employee who resides in Beaumont tested positive for COVID-19.

Another assistant director of nurses, known as “ADON D” in the investigation, did not provide training to the registered nurse regarding appropriate personal protective equipment to wear, investigators alleged. The incident was identified as immediate jeopardy, or IJ, on April 2 but removed the next day.

Immediate jeopardy is a federal term defined as “a situation in which the provider’s noncompliance with one or more requirements of participation has caused, or is likely to cause, serious injury, harm, impairment, or death to a resident.”

However, investigators alleged Senior Rehab “remained out of compliance at a potential for more than minimal harm with a scope identified as widespread due to the facility’s need to complete in-service training and evaluate the effectiveness of the corrective systems.”

ADON D said she “took COVID-19 training material” from the CDC in December 2019 and educated staff members on it on March 11 and 13, but did not recall providing “highlights” of the facility policy on the virus or giving an information packet to the infected nurse. The nurse’s last training on infection control in the facility’s personnel file was dated July 17, 2019, according to the investigation.

Senior Rehab was required to submit an “acceptable plan of correction” for the deficiencies cited.

Workers who tested positive for COVID-19 were not allowed to work unless cleared by the Port Arthur Health Department.

A policy statement from the facility read: “This facility follows current CDC guidelines and recommendations for the prevention and control of COVID-19,” according to investigators.

The HHSC accepted a plan of correction from Senior Rehab for findings in another probe conducted on Jan. 28. The facility was found in violation of state health and safety policies related to dangerous drugs and Texas Administrative Code rules regarding consent to the prescription of psychoactive medication given by a resident or an authorized person on the resident’s behalf and accuracy in pharmacy service delivery.

HHSC officials determined all violations were corrected and “no new noncompliance was found” during a revisit survey on March 2.

A call to Senior Rehab seeking comment Friday evening was not returned.