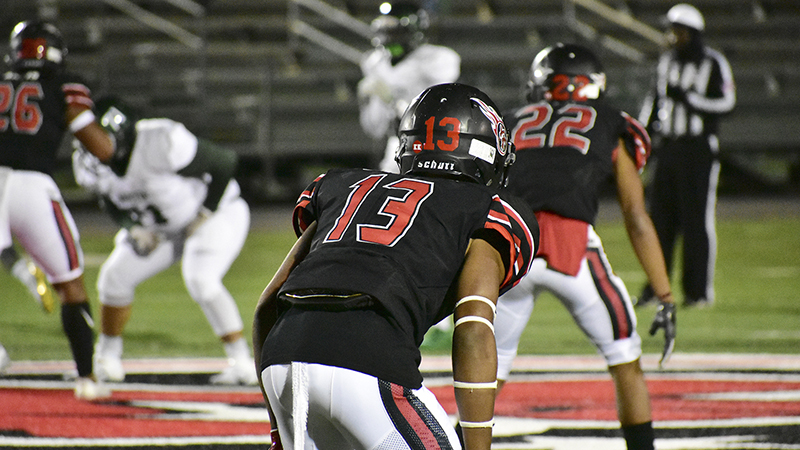 Jaylon Guilbeau has earned a spot in the All-American Bowl in San Antonio. (I.C. Murrell/The News) 11-8-19

Jaylon Guilbeau can now call himself an All-American.

The Memorial junior defensive back announced on Twitter Thursday that he’ll participate in the 2022 All-American Bowl game played in the Alamodome in San Antonio.

“It feels very good,” he said. “I was so hyped when I first got the call and they were telling me. It was a blessing. Everybody doesn’t get this opportunity, so I’m happy I got this opportunity to be an All-American.”

The game, begun in 2000, was sponsored by the U.S. Army until 2018. It is now sponsored by American Family Insurance.

“It’s good for him,” Memorial head football coach Brian Morgan said. “It’s a reward for hard work, and doing the right thing. He comes to work every day, and that’s just him. He’s blessed with a lot of God-given talent and some good genes, but he comes to work every day, and he’s a high-character kid, high work ethic. I think you put those together combined with some genes and some good talent, and you’ve got yourself a good player.”

Morgan and Guilbeau acknowledge it took hard work to earn a spot to play in San Antonio.

“You’ve got to really grind for what you really want, and I’ve been grinding since I was in the ninth grade,” Guilbeau said. “I’ve been training and working hard, and now it’s paying off.”

Morgan said that Guilbeau’s continual work has done the most to make him stand out.

“If people don’t know about him now, they haven’t done their job for recruiting,” Morgan said. “More than anything, he travels a lot with seven-on-seven, and it’s another opportunity to compete against really talented players. I think when you do that, you benefit because you don’t get to play against those caliber players every day at practice. It just makes him a better player. He travels around and plays seven-on-seven against these top players, and we know he’s going to compete. That’s in his nature. That lets him work against somebody that’s really talented at their position as well.”

Guilbeau is looking forward to playing for national audiences, and hopes his family and friends will be among them.

“That’s going to be a big deal,” he said. “I want my family, my friends, I want everybody to come out that can’t come out because of the virus, I want them to see it on TV.”

Guilbeau says he’s going to go in “with a chip on his shoulder.”

“My feelings are going to be good,” he said. “It’s like the whole team are All-Americans. You can’t be scared.”

Memorial graduate and former Kansas City Chiefs running back Jamaal Charles participated in the All-American Bowl his senior year in 2005.

Charles went on to play for the University of Texas and was drafted by the Chiefs in 2008. Charles, at 5.38 yards per carry, is the all-time NFL leader in yards per carry among players with at least 1,000 carries.

A total of 450 All-Americans have gone on to play in the NFL.

LSU starting nickel back and former Memorial Titan Kary Vincent Jr. played in the unrelated, Under Armour-sponsored All-America Game in 2017.

This story was updated to reflect that Guilbeau has been selected for the 2022 All-American Bowl.