VIDEO: Bartie invites area to take pledge to “Turn Down the Numbers” 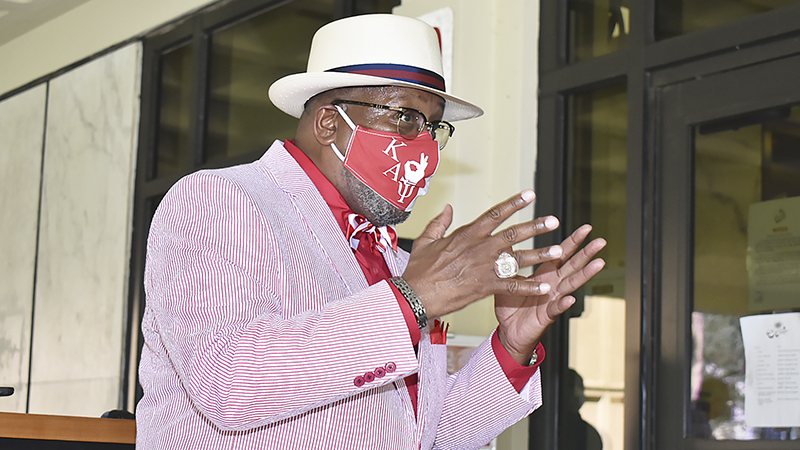 On the same day Port Arthur announced its 15th coronavirus-related death, Mayor Thurman Bartie invited residents and local officials of his and surrounding cities to pledge to “Turn Down the Numbers.”

“The instances of positive tests and the deaths of citizens at numbers greater than we desire leads me to this juncture as mayor of the city of Port Arthur to solicit your help in “Turning Down the Numbers” in Port Arthur, Jefferson County and our entire region,” Bartie said. “I ask that my fellow mayors of surrounding cities, our county judges, city councils, county courts, school boards, houses of worship and citizens all to join me in this effort.”

Bartie also invited fellow mayors and Port Arthur-area school superintendents to establish the project, which he called a by-product of his involvement with the U.S. Conference of Mayors.

“What they asked us to do was to reinvigorate society in our community because the virus is not going away,” Bartie said. “It’s not just in Texas. It’s several other areas. When they did it, I began to ponder what can I do in my community. That’s why I made it an offer — not a challenge — but an offer to mayors in other communities that they can use what we have or devise a unique one for their communities. If we only do it in Port Arthur, and they don’t do it in Beaumont or Bridge City, or they’re not doing it in Groves or Nederland, then it sounds, like, moot. So, we’ve got to have everybody, basically, on the same page.”

Bartie said he’s been impacted by coronavirus as well, as two of his grown children and another have been diagnosed with it. He also mentioned having to handle bodies of those who died of coronavirus as a licensed mortician.

Her death is the first COVID-19 related death in August for the PAHD’s four-city service area, after 11 passed away in July.

“Last week was a very unfortunate week because we reported six deaths,” PAHD Director Judith Smith said. “So, the mayor’s approach and those things that have been stated are things we’ve been pushing for the last couple of months. I believe if we honor the pledge and do our part, we can help to eliminate community spread. That’s what’s going on now. A lot of what we are reporting are individuals who may be in the same household. That’s one of the things we’re looking at right now.”

Bartie also hinted toward the possibility of Port Arthur enforcing citations of $250 for repeat offenses to Gov. Greg Abbott’s mandate to wear facemasks in most public places, similar to a plan Houston is taking to combat the virus. Abbott’s general order does list exceptions to the rule.

“I’m sure it’s going to come to that,” he said, although he doesn’t expect to move toward creating such a policy for Port Arthur for at least the next couple of weeks. “We’ll know in a couple of weeks how effective it is in Houston.”

Thursday (April 6) marks the final day for free walk-up COVID-19 testing at the Carl Parker Center at Lamar State College Port Arthur. Testing begins at 8 a.m. and continues until either 4 p.m. or all testing supplies are exhausted. No preregistration is required.