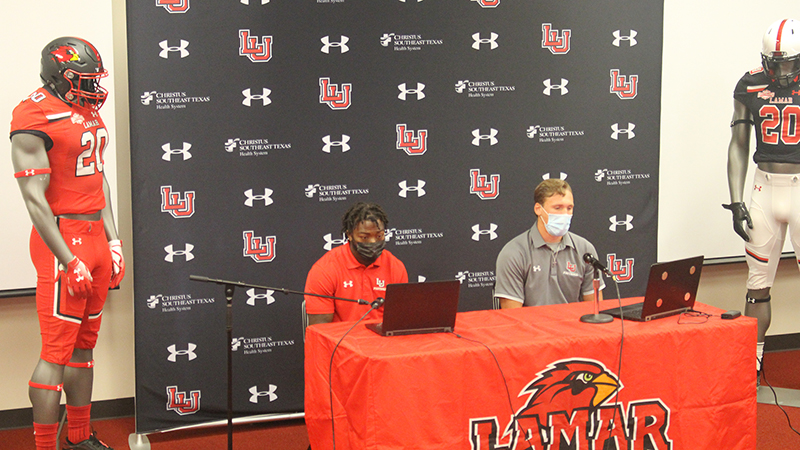 Blane Morgan said that the past four months getting ready for the football season have been a journey.

The first year head coach at Lamar University said the work and leadership of the athletics department and medical staff has been indispensable.

“Those guys have spend countless hours just to get to this point where our student athletes are healthy,” he said.

Lamar held its annual football media day virtually on Tuesday. Morgan, along with several players, spoke to reporters through Zoom about their experiences over the summer and their expectations for the season.

Absent a spring offseason due to the COVID-19 pandemic, Morgan spoke on the urgency of getting the program back up and running in time for Lamar’s first game hosting Southland Conference opponent Incarnate Word on Sept. 12 and traveling to Stephen F. Austin on Sept. 19.

Nearly all of the Cardinals’ 2020 schedule is reserved exclusively for conference opponents, though the Cards pay Rice a visit on Sept. 26 as the third game of the season.

Getting ready for a Southland opponent right off the bat takes a good deal of preparation, Morgan said.

“I think going into the season, whenever you have a conference opponent that early in your season, you’re going to take a look at that opponent in the summer,” he said. “I think most people do that when they have an early conference opponent. You’ve got to prepare like that’s going to be your first game. That’s what we did; we spent a little time prepping for Incarnate Word and SFA.”

Senior wide receiver Kirkland Banks said the team is making an effort to keep current events from making them lose their focus.

“The main part is just being positive, having a positive start,” Banks said. “A lot of stuff is going on in this world, but we’ve got to keep our internal vision, which is to have a winning season.”

Morgan said Lamar wants to have its players feel like they have a voice and a place to express that voice.

“We’ve tried to have an open forum and let them know they do have a voice and give them a platform to use that voice,” he said.

COVID-19 forced adaptation on the part of the Cardinals when it came to preseason workouts.

Senior kicker/punter Bailey Giffen said he spent time kicking into a makeshift net in his backyard with many schools closing.

“It was interesting,” he said. “I had to bounce around a couple of fields as schools were shutting down. With the resources I had, I did everything I could.”

For Morgan, the ability to adapt is what will distinguish the effective teams.

“You’ve kind of got to look down the road and prepare for the future a little bit. I think the coaches that do that best will get a leg up on the opponents.”