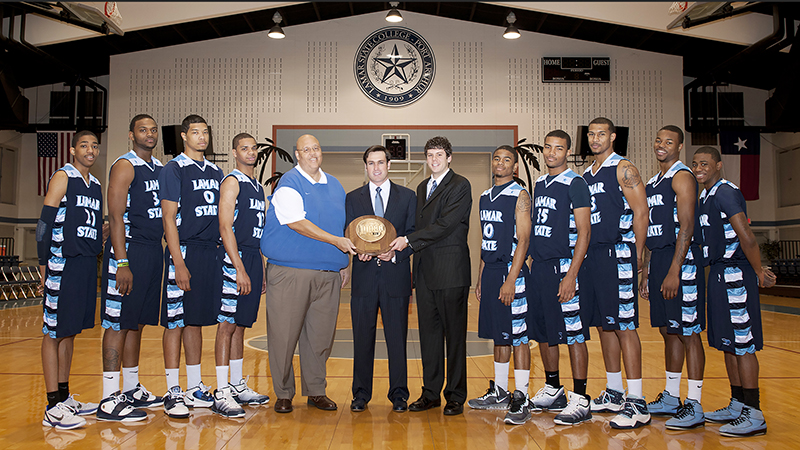 The 2010-11 Lamar State men’s basketball team that won the NJCAA Region XIV tournament championship and earned a berth to the NJCAA tournament. Larry Alexander is pictured in the blue vest to the left of head coach Matt Cross. (Bart Bragg/Courtesy of Matt Cross)

Matt Cross met Larry Alexander in 2006 when Cross took over the men’s basketball team at Texas College in Tyler. 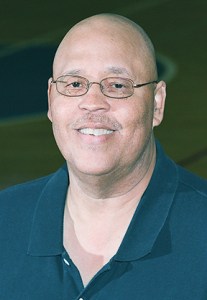 “It really was Coach Larry Alexander who ultimately convinced me that I could turn around the program at Lamar State and take it to the top of Region XIV,” Cross said. “Coach A was so adamant that I go to Port Arthur that I finally relented. I don’t know what made him so convinced that I would be a good fit there and be a successful coach in an incredibly strong league.”

Cross hired Alexander as an assistant in Port Arthur, and the two helped the Seahawks go 74-30 in three seasons, including the Region XIV tournament championship in 2011 and Region XIV regular-season title in 2012.

The cause of death was not immediately known. Cross noted Alexander had beaten cancer 15 years ago but had spent much of the past three years with infections.

“He was a true champion in my book by the way he was able to overcome so many health problems and still find a way to make it to the gym every day to coach the game he so passionately loved,” Cross said. “That really inspired all of us making a tremendous impact on the players he coached, the campus he worked and the community he represented. Coach A overcame adversity to achieve victory every day in his life. Like so many, his passion is what kept him alive.”

Alexander was born Dec. 6, 1956, in Austin and grew up there and in Killeen, from where he finished high school in 1975 as a three-sport athlete. He competed in basketball and baseball Rose State College near Oklahoma City, transferred to Temple College to play basketball only, earned an associate’s degree from Angelina College in Lufkin and attended Texas College as a business administration major.

Alexander coached on the AAU scene in Austin and gave future Texas Tech head coach Chris Beard his first coaching job, Cross said. Beard was hired to replace Cross at Lamar State in 2012, but did not coach a game there.

Alexander, who also coached at Southern University Shreveport, has been described as an old-school coach and father figure, coaching the players hard and hugging them later.

“He was really good with the player relations,” former Lamar State President Dr. Sam Monroe said of Alexander. “He could talk to the players. He could motivate them. That helped them off the court. He was like a father figure to many of them. He was a really, really fine person to deal with, from my standpoint. He was good on details and keeping up with scheduling. He would keep up with hotel reservations. He was a real asset while he was there.”

Alexander, Cross noted, introduced him to a three-point guard system that would give the Seahawks the best chance to win in a region dotted with NCAA Division I-caliber guards. That helped Lamar State win 20 games in the coaches’ first season there, igniting a turnaround from a 2-17 mark in Region XIV the season before.

Alexander, who retired from Lamar State, made many key decisions that helped the Seahawks become successful, Cross said.

“Larry really loved Lamar State College Port Arthur,” he said. “He had so many friends on campus and had a lot of respect for and really liked President Sam Monroe, who hired Larry and I and gave us the resources we needed to win in the best league in the country. Larry loved the Port Arthur community and had so much pride in winning college basketball championships in the city.”

Alexander is survived by his wife of 41 years, Debra; daughters Lauren Smith of Tyler and Stefen Harmon of Mount Pleasant; three grandchildren and three brothers and one sister.