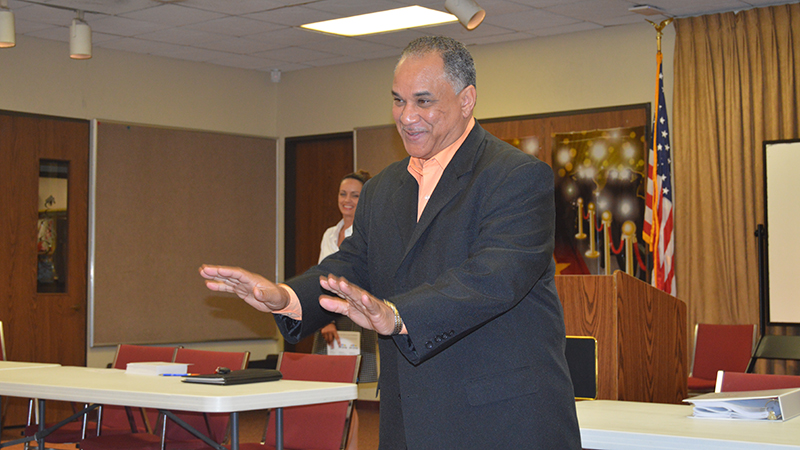 Keith Richard speaks during a 2017 community meeting at the Port Arthur Public Library while he was serving as District 4 councilman. (The News file photo)

The plight of homelessness in Port Arthur is not a new issue Keith Richard is tackling.

“When I was on council, that was an issue then, but it wasn’t my district,” said Richard, who served for a year on the Port Arthur City Council before stepping down in 2016. “I didn’t think that was ongoing until recently. I heard a rumor there was a site that was being unattended to. It’s a health issue, and especially with the COVID [pandemic], it brought attention to me.”

Richard’s attention was drawn to a homeless location on Ninth Avenue between Ninth Street and 10th Street, where the old Howard’s Supermarket parking lot was located. On Saturday, starting at 10 a.m., Howard and others will help residents clean up the location and install 10 new tents, a fence around the canopy area and Port-A-Potties.

“We will bring food and drink out there,” he said. “Everyone working will be protected because of the COVID virus. The ones living out there will help us with the cleanup as well.”

Richard is inviting volunteers to come.

“I do not want to make this political,” he said. “I just want to be able to help people. This is love for people.”

Richard is pastor of New World Harvest Church in Nederland and is working on establishing another campus in Port Arthur. His vision for the homeless community is to establish a mentorship program that would address their health, mental, social, job and housing needs.

“The idea is to get them to a small housing area to be established down the road,” Richard said. “I need to know their condition. I want to be able to capture all issues.”

The goal of the program, Richard said, would be to guide each person to the right resources for their needs and walk them through the process in a five-year turnaround.

“That will be dependent on each person’s ability to achieve from where I’m at to ownership, entrepreneurship, or own your own home or reunite with your family,” Richard said.

Homeless persons who participate in the program would be monitored to make sure they’re attending required meetings, he added.

Donations are also accepted. To donate, call Richard at 409-293-8742 or email him at newworldharvestchurch1@gmail.com.