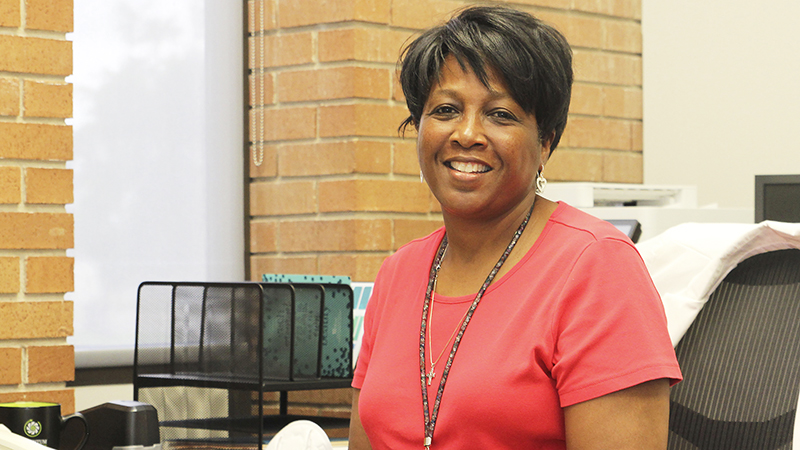 She may be a new face on the Lamar State College Port Arthur campus, but Dr. Lona Alexander-Mitchell is no stranger to Port Arthur.

“I’m back home,” said the Port Arthur native who grew up six blocks away from her new office as the college’s Title V Project Director.

“Port Arthur is home for me. My family still lives in Port Arthur.”

The Lincoln High School graduate says she took a typing class at the college when she was younger. But now she hardly recognizes the downtown campus.

She returns to Port Arthur from Aldine, one of three public school districts she has served as director of special programs, building and leading early childhood and afterschool programs and career and technical education.

Alexander-Mitchell will be in charge of Camino a la Excelencia (Pathway to Success), an outreach to Hispanic students as well as first-generation students.

“It’s going to give the college an opportunity to do some things for students,” she said.

Forty-five percent – nearly half – of Port Arthur residents of school age (5 to 17) speak Spanish, according to a five-year study released in 2018 by the U.S. Census Bureau. The same report showed only half of Port Arthur’s Hispanics graduate from high school, with fewer than 5 percent completing a four-year college degree.

Hispanics are the largest ethnic group attending Lamar State College Port Arthur, making up 34.1 percent of the enrollment in 2018-19, compared to 29.4 percent Black and 28.2 percent White.

“We’ve got some really good programs we’re going to put into place to offer better access to what students need to be successful,” Alexander-Mitchell said. “We’re starting a parents’ academy and invite them in to see the school and what’s available to their students. We’ll have Tutor.com open to all students with 24-hour access, and we’ll have career coaching. It’s a really good tool.”

Those programs will be run out of LSCPA’s coming-soon Excelencia Center at the Ruby Fuller Building. Repairs to the structure flooded by Tropical Storm Harvey in 2017 are in the works.

LSCPA is classified a Hispanic-serving institution by the government because it is an accredited, degree-granting institution of higher learning with 25 percent or more Hispanic enrollment.

“There’s funding out there through the Department of Education to help and Dr. Millsap [Pamela Millsap, Lamar’s Vice President for Academic Affairs] and her team put together a grant proposal that rated among the top 30 submitted,” Alexander-Mitchell said.

More than 250 higher education institutions applied for Title V grants in 2019. LSCPA’s application was one of only 43 accepted and the college was awarded $2.8 million, to be distributed over five years.

Alexander-Mitchell earned a bachelor’s degree in elementary education from Wiley College, a master’s in educational supervision from Lamar University and a doctorate in educational leadership from Texas Southern.

She began her career as a teacher at Port Arthur’s St. Mary’s Catholic School. She taught math and was curriculum coordinator at Beaumont’s Dunbar Elementary before moving to Port Arthur ISD as director of special programs.

She was assistant principal at West Orange-Stark High School, then principal of Beaumont’s Fehl Elementary before joining Aldine ISD for the first of two tenures, as director of consolidated federal programs then Title I director, a program later known as No Child Left Behind.

Back in Beaumont, Alexander-Mitchell helmed an award-winning afterschool 21st Century Community Learning Center program for six years before returning to Aldine ISD in 2014, as director of special programs.

There, she managed Perkins Act CTE (career and technical education) programs to prepare students for occupations requiring more than a high school degree but less than a four-year college degree.