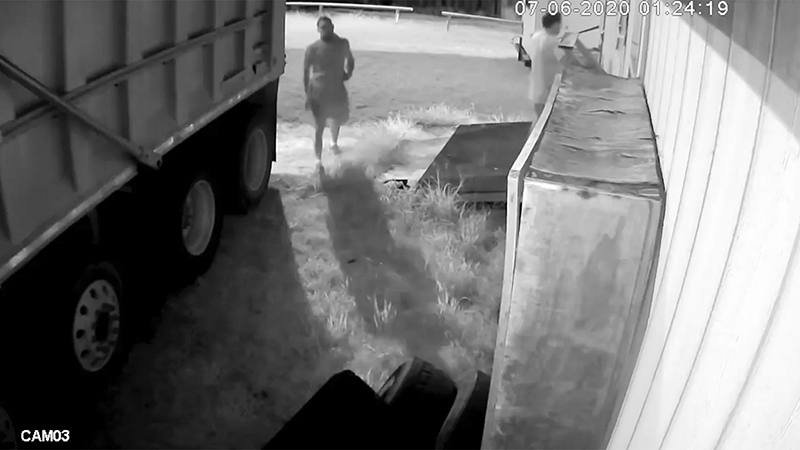 This is a screenshot from video released by Port Arthur Police of a burglary in progress along Memorial Boulevard. (Screenshot from PAPD)

The nature of the black-and-white surveillance video presented to investigators has limited what is known about a pair of Port Arthur burglars who recently victimized a Memorial Boulevard business.

Determining if other people were involved or specific characteristics about the suspects has proven difficult.

“As far as we know, it’s just those two subjects,” Guedry said. “There is a glimpse of a vehicle they get in and out of. We can’t see anyone else, but we also can’t see who gets in the driver’s side. There could be somebody waiting, but we don’t know.”

Guedry said detectives are not releasing what was taken during the break-in.

What is being made public is Port Arthur Police’s plea for help locating the burglars.

Detectives released a 90-second, black and white surveillance video that appears to show two men in a four-door, light colored sedan force their way into a warehouse and exit with unknown items.

The video is time stamped at 1:20 a.m. July 6, with authorities indicating those responsible burglarized “a local business” in the 2400 block of Memorial Boulevard.

If you can identify these men or have any other information, contact Crime Stoppers of SETX at 409-833-TIPS (8477).

You won’t be asked your name and may be eligible for a CASH reward. You can also report the tip by downloading the P3 Tips app on a smartphone.