Century of Claverism: Local Knights of Peter Claver mark 100 years of service to others 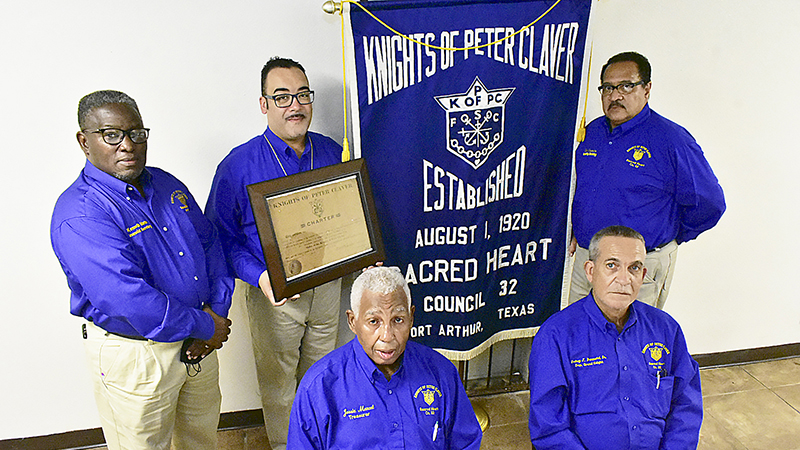 Sacred Heart Council 32 of the Knights of Peter Claver was approaching 50 years of service when Jessie Marcel joined the group in January 1970.

“It’s a good organization to be in,” Marcel said. “I remember the day I got initiated. It was on a Sunday, I think. We turned out at church that morning. At 3 o’clock we got initiated. I think it was some seven people that were initiated.”

This weekend, Marcel will commemorate another milestone of the council — its 100th anniversary.

An honorary Mass for the council is scheduled for 9 a.m. Sunday (Aug. 2) at Sacred Heart Catholic Church, 920 Booker T. Washington Avenue in Port Arthur. Sacred Heart was granted a charter from the Knights’ National Council on Aug. 1, 1920. 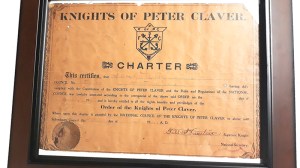 “St. Peter Claver was a Jesuit priest that came from Spain,” said Paul Landry, one of Council 32’s Knights and president of the Texas State Conference. “He was of nobility. He traveled to Cartagena, Colombia. His ministry was to convert those slaves who were being transferred over from the African slave ships to Christianity. It’s been told in stories he converted more than 300,000 slaves into Christianity just by going over there and ministering to them, praying for them, clothing them and doing all of that.”

Leo Carmouche said he always noticed the Knights doing acts of service as a child and wanted to join the organization. Today, Carmouche serves as Council 32 recording secretary. 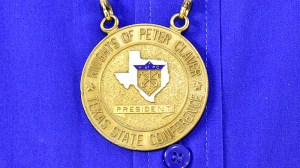 The medal of the president of the Knights of Peter Claver’s Texas State Conference, worn by Paul Landry. (I.C. Murrell/The News) 7-27-20

“The Knights organize a lot of social activities, and we always seek to perform acts of Claverism — doing things God would want us to do,” he said.

Rodney Broussard is the Grand Knight, or council leader. He further defined Claverism as dedication to God first, the church and the community.

“Without the church, we don’t function,” Broussard said.

The purpose of the Knights of Peter Claver is “to render service to God and His Holy Church, render aid and assistance to the sick and disabled, and promote social and intellectual association among our members,” according the organization’s website. It was founded Nov. 7, 1909, in Mobile, Alabama, by four priests of the St. Joseph’s Society of the Sacred and three laymen of the Diocese of Mobile. 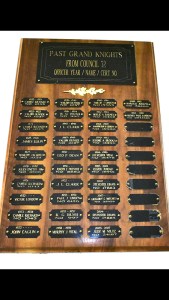 A plaque listing the past Grand Knights of the Sacred Heart chapter of the Knights of Peter Claver. (I.C. Murrell/The News) 7-27-20

Landry was elected to a two-year term as state president in 2018 but was granted another year due to the effects of the coronavirus pandemic. He can run for up to two more terms.

“I wanted to make a different type of change in the organization,” he said. “I felt we needed some more direction in how to get our members engaged in the state of Texas. I ran for it, and I’m here today.”

The chapter organizes fish dinners during Lent as fundraisers, and Marks says the Knights perform 10,000 to 11,000 service hours per year.

“Community service is a pillar of our organization,” he said.

The Knights’ hall is located on the corner of Grannis Avenue and 10th Street and was built 50 years ago when Marcel was a new member.

“This building has been going strong for 50 years,” Landry said. “If it weren’t for those men who established the center, we wouldn’t have this today. They paved the way with a lot of labor and a lot of hard work, and they came to church every week.”