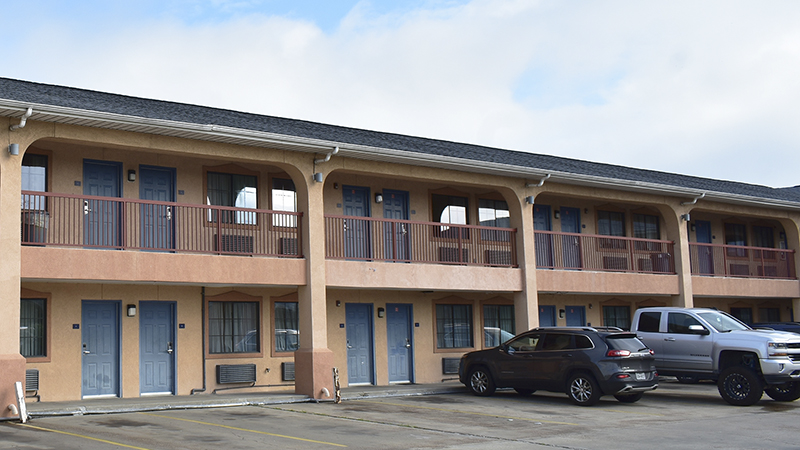 A guest at Executive Inn and Suites, 5131 E. Parkway St., discovered racist markings on a mirror inside a room Friday. (I.C. Murrell/The News) 7-27-20

GROVES — A video of an African American woman’s encounter with racist writing on a mirror inside a Groves motel room drew at least 2,100 views on her Facebook account over the weekend.

Kait Hines snapped a photo with the n-word and a symbol resembling the Schutzstaffel logo written on the mirror inside a room rented to her at the Executive Inn and Suites, 5131 E. Parkway St.

The Schutzstaffel was a Nazi Party paramilitary unit under Adolf Hitler responsible for the genocidal killing of millions of Jews and other victims during the Holocaust, according to Wikipedia.

That post, which included a smartphone map of the motel, was made Friday evening and shared 278 times before noon Monday. 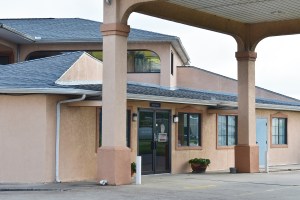 Forty minutes after that entry, a 13-minute, 30-second video of Hines’ exchange with an Executive staff member and Hines’ reaction to the ordeal was posted. It was shared 23 times before noon Monday.

Hines, who could not be reached for comment, identifies herself in the video as a self-employed hairstylist visiting the area for work. She lives in Houston, according to her Facebook account.

In the video, Hines speaks with a staff member and says she wasn’t mad at her or the motel staff, but asks why the room would be rented out to her if it had a racist word written on property. Hines does not make mention of the apparent Schutzstaffel logo, but the staffer explains to Hines the employee who discovered the markings does not speak English and she did not see them herself.

“Me being a black woman, it makes me feel not safe to be somewhere where they’re writing [the n-word] on the mirror. It makes me feel very uncomfortable for me. That’s all I’m saying.”

Mikey Sangdod, owner and manager of the motel, told Port Arthur Newsmedia a housecleaner who doesn’t understand English well tried to tell the housekeeper: “I can’t get this off the mirror. Can you come check it out?”

Each room, he said, contains a giant vanity mirror on top of the sink and a tall, skinny mirror behind the door. The housekeeper checked the giant mirror and saw it was clean, but did not check the one behind the door, he explained, calling it an oversight on the part of his staff.

“It looked like it was written in lipstick,” Sangdod said of the markings. “When the staff member discovered the writing, it was sticky and stubborn to come off. The cleaning staff member came to our head of housekeeping and made her aware something was written on one of the mirrors, not specifying which mirror.

“It was an oversight on cleaning, not a personal attack on our part. I don’t think a person who believes in [the Schutzstaffel logo] would work for me because he might hate me.”

Sangdod is a native of India who has been in the Port Arthur area since 1997 and previously owned Seagull Motel on Gulfway Drive.

Sangdod alleged a visitor or previous customer who stayed the night before Hines’ arrival made the markings. He says no-trespass and do-not-rent notices were filed with the Groves Police Department against the renter before Hines, but added no charges were filed because it might have been the previous renter’s visitors, which he could not confirm at the moment.

Groves Police Chief Deputy Kirk Rice said he has not seen any no-trespass and do-not-rent filings from Executive, although such filings with the department are common.

Asked if police responded to racist markings on property in recent memory, Rice said: “Actually, we haven’t. I’ve been here 30 years, and I haven’t seen that. I’m not saying it hasn’t ever happened.”

Hines visited the motel office upon discovery of the markings, Sangdod said, and the staff member offered to refund her or switch rooms. According to the video, Hines was moved to another room after learning her refund would take three to five days to process with her purchasing card, but Sangdod said Executive eventually refunded Hines.

“However, we started getting a lot of calls to our motel with people threatening the manager and staff due to Ms. Hines’ Facebook post,” Sangdod said. “When we addressed the calls, Ms. Hines did ask for the refund, and she got a refund. She did not stay at all.”

Hines acknowledges she posted the video, but says she doesn’t know who made the calls.

“But I did tell my family that I walked in a room, and there’s the word [n-word],” Hines tells the staffer. “Me being a Black person and we have to go through that as a race, the word [n-word] is on the mirror.”

Hines wrote on Facebook nearly 90 minutes after the video post: “I didn’t expect my post to go Viral [surprise emoji]. I have too many inbox’s and comments. I am okay everyone! I left! [Praying hands and red heart icons] God Got me! [praying emoji]”

Sangdod said he has been trying to reach Hines in hopes of making up for the incident. With minorities comprising the entire motel staff, Sangdod believes the incident hits home.

“I want to meet her and let her know whatever we can do to compensate her for this, we’re willing to do that,” he said.