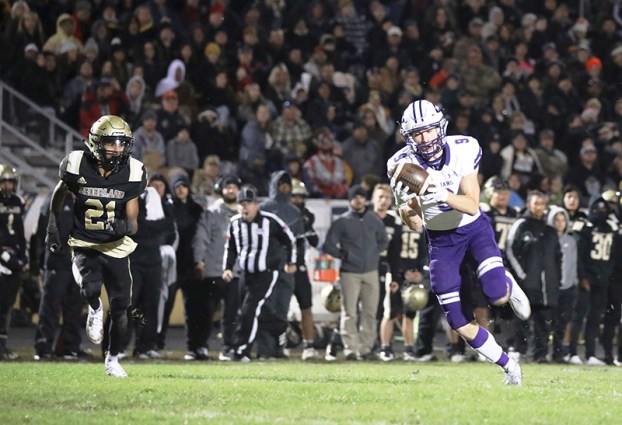 Kaleb Wuenschel of PNG hauls in a pass as Logan Nguyen of Nederland chases him during the Mid-County Madness game on Nov. 8, 2019. This year, PNG and Nederland play each other on Oct. 23 at Bulldog Stadium. (Leo Weeks Photographers)

District 12-5A District II football coaches met Thursday night and decided that the district’s schools would play all 10 games the UIL is allowing for the 2020 football season.

For Nederland and Port Neches-Groves high schools, both teams will play their three non-district opponents, take a bye week, and then play each other on Oct. 23 at Bulldog Stadium to start district competition.

Nederland’s Monte Barrow and PNG’s Brandon Faircloth said that the district was largely in agreement that the schools should let their athletes play all 10 games.

“I think everybody was on the same page,” Barrow said. “The UIL gave us an opportunity to play a full schedule, and we felt like we owed it to our kids, as did all the coaches, to play as many games as possible.”

Faircloth said that the district is doing what the UIL is allowing them to do.

“We just moved it back like the UIL told us to,” he said. “Everything’s still in a fluid situation, but that’s what we’re going to go with for now. I’m excited to have a plan and excited to know when our first game is.”

PNG’s schedule only had one hole to fill, and Memorial obliged to help. Faircloth is looking forward to a tough non-district schedule.

“We were blessed, we only had to find one game and Port Arthur Memorial was looking,” Faircloth said. “It’ll be tough, but for non-district we want to play tough opponents to get us ready for district. With Port Arthur Memorial, Beaumont United and Tomball, that’ll definitely get us prepared for our district. Tough opponents, good coaches, good players, that’s the only way you can get ready for your district schedule.”

Mid-County may need to hold back on some of the madness for the Nederland-PNG game on Oct. 23. Barrow and Faircloth are still working out how the Bum Phillips Bowl will be held at Bulldog Stadium, though the UIL will require that the stadium have no more than 50 percent of its capacity present in the facility.

“We’re still trying to figure out the best scenario for our fans at our home games and trying to be as fair as possible,” Barrow said. “Everybody’s not going to be happy, just because it’s 50 percent, and that includes people in the stands like a band or a drill team. We’re still working through those layouts.”

Barrow expects the PNG game will be challenging to plan, as far as policies on stadium attendance are concerned, but the rest of the season shouldn’t be as tough.

“With teams that are coming from Houston, the district crowd is just not as big as it is when you’re playing Vidor or Lumberton or Memorial,” he said. “Those are teams that are right here, so the capacity level over there, we don’t have to worry about.”

“Unless the state or a county shuts the entire school down, all the teams are in compliance with what the UIL is asking,” he said. “If somebody on your team tests positive, well as long as you had a mask on and weren’t within six feet without a mask, that kid isn’t going to be sent home. Teams should not be shut down.

“You may be playing some games without kids you’d like to have on the field because of the situation you’re in, but as a team and as a schedule we feel good we’re going to complete it as is.”

All games unless otherwise specified begin at 7:30 p.m.