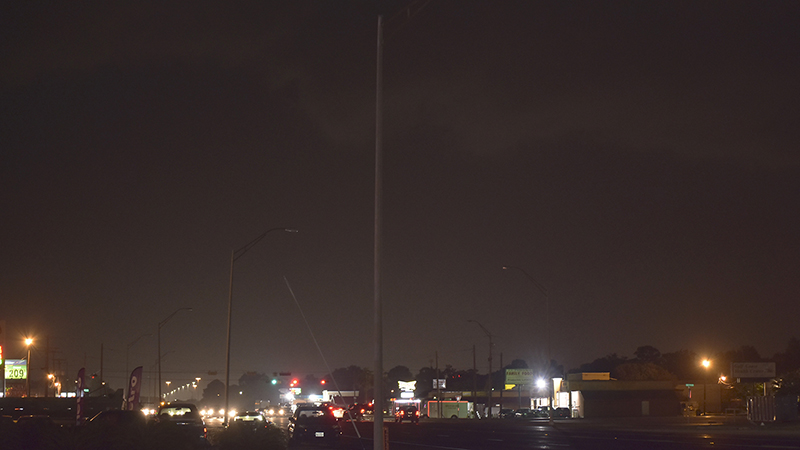 Street lights near the intersection of Memorial Boulevard and 25th Street are dark on July 7, but taller lights near the Memorial-Texas 73 cloverleaf can be seen shining brightly in the background. (I.C. Murrell/The News) 7-7-20

Almost 500 of 556 streetlights Port Arthur officials reported dark to Entergy have been repaired.

Entergy customer service manager Ron Fletcher confirmed 482 of the lights have been repaired throughout the city during the weekend of July 11-12, which was days after members of the Port Arthur City Council blamed the power company for lack of service to the lights.

City Manager Ron Burton gave an update on the light restoration during this week’s council meeting and called Entergy’s efforts “a considerable amount of progress” in recent weeks, but he later challenged Entergy to improve its response to the lights.

“Many have been changed to energy-saving devices,” Burton said, referring to LED, or light-emitting diode, poles. “Four crews have been sent to repair those lights and another four crews are updating the technology. They made mention of working on Jimmy Johnson [Boulevard]; many contractors are there.”

Contractors were seen working on streetlights near city hall that haven’t been upgraded in a decade, Burton added.

Fletcher said 65 of the lights city officials inquired about still require underground boring, but repairs on that are ongoing. Fletcher warned earlier this month those lights would require more time to fix than others.

“With the weather being like it’s about to happen, it will delay us somewhat,” Fletcher said.

Regarding the remainder of the inquired-about lights, Fletcher said three poles near Sunken Court have been moved due to a road-widening project in the area, two lights did not belong to Entergy, two more belonged to the Texas Department of Transportation and two could not be located.

Burton challenged Entergy’s response to the outages during this week’s council meeting, echoing sentiments of councilmembers from the previous session. He suggested recommending to council withholding payment if improvements aren’t made, two weeks after District 4 Councilman Harold Doucet offered a similar idea.

“I want to make Entergy aware by all means we are serious about this,” Burton said. “We pay Entergy about $100,000 to Entergy on a monthly basis for the services. We’ve got to make sure we receive quality service as the citizens of Port Arthur for the money that we pay. I take my time out to drive around the neighboring cities, and we do not see the level of outage in those neighboring cities. I do not see the level of outage in those neighboring cities as we see in the city of Port Arthur, and I made it very clear to them that I’m not satisfied with the way we are being treated. If it means we get to the financial part of it where I make a recommendation to council, I will have no problem making that recommendation to council in terms of withholding monies to Entergy, as far as the delivery of service is concerned. … I will not rest unless we have made sure 100 percent of those [streetlights] are being repaired.”

Asked about the comment, Fletcher said his communication with Burton about the outages was positive and denied any acts of preferential treatment on Entergy’s part.

“We are working feverishly,” Fletcher said. “In fact, we found other lights beyond the 556 we repaired as well. We continue to look for other street lights out during our normal course of business, and we are trying to get those repaired. We try to respond to every city as fair as possible. There is no preferential treatment for one city over the other. That’s not how we operate.”