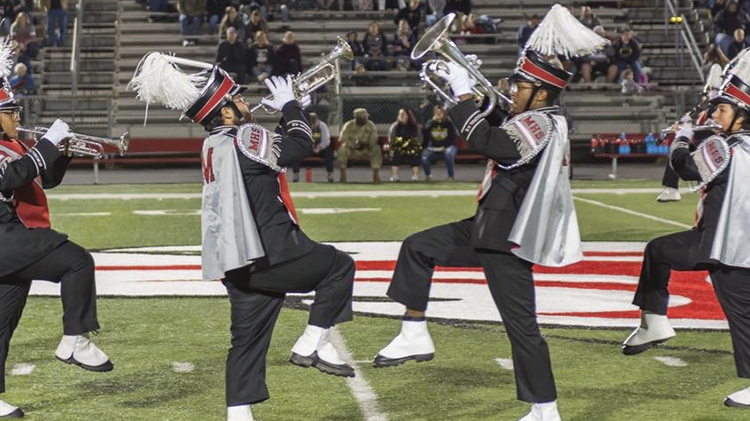 The Titan band is adapting to the new University Interscholastic League rules set forth for the football season, effectively giving schools competing in the larger districts an extra month of practice before starting in late September.

“We will have all of our members participating via Zoom,” he said. “They are going to have their instruments at home. Usually, we have so much time for exercising, marching fundamentals, field maneuvers and an hour of playing instruments every day. They will be doing all of that from home and that way they will be able to still connect with directors.”

Frazier said the shortened camp is designed to teach the basic skills without burning out students.

They are hoping to resume in-person practices once school begins.

“That is up to our administration,” Frazier said. “Generally, when school starts we should be able to start our rehearsals when in-person classes resume as well.”

Similar to the athletic programs, the band has to adapt to special social distancing, health and safety guidelines.

Frazier noted that directors all over the region spent an extensive amount of time researching the safest way to conduct rehearsals.

“That’s why we chose to start virtually,” he said. “When we do return in-person, our measures include social distancing inside and outside, a lot of surface cleaning and a lot of daily protocols such as not being able to use water fountains and trying to limit the amount of physical interaction that anyone will have with another person throughout the day.”

Students will be charged with cleaning their own instruments.

“Our students are already familiar with cleaning their instruments so our job is to provide disinfect wipes, cleaners for mouth pieces and aerosols to clean their own instruments before and after use,” Frazier said. “With cleaning and proper distancing, it will keep us from those events that might occur.”

Social distancing measures will include breaking down the large group into three or four groups of 25 students each.

“We have three directors and that becomes manageable to keep the protocols we have in place,” Frazier said. “The preliminary plan is start off with those small groups, and as more information comes available we will see if we can start to incorporate larger groups.

“We will take advantage of the space outside, and that way kids are still getting the experience but not putting themselves in harm’s way.”

Frazier said on the bright side, the bizarre year will allow for a extra creativity in developing marching sequences.

“The name of the game this year is to be innovative to use technology and other resources,” he said. “We can still have band, but we just have to do some things in a different way. That’s what we, as band directors, do.”

Frazier is confident his band students will develop their musical talents and find a way to have a good time.

“We are blessed to have really good student leaders in our band,” he said. “They’ve been quick to adjust to anything we implement that deals with technology and filtering information that way.”

Junior section leader C-Jay Cunanan said the students’ current goal is to focus on overcoming the obstacles that come with not being together.

“We want to still be connected to each other and give each other feedback,” he said. “We are trying to motivate each other, keep practicing and focus on getting better for the future.

“We make sure to ask each other for help, talk to our band directors and try to handle things together and on our own. I want to be prepared for everything.”

Sophomore drum major Ari Bullard said the 2020-21 school year will not be what anyone was expecting.

“We know that, but we’ve been doing group chats to make sure we are getting the info we need and we’ve been practicing during Zoom calls,” she said.

Bullard knows her role is to set an example.

“We can still work to be a good band despite the obstacles,” she said. “There are games we play on Zoom to bond. A bond is the main thing for bands, because without that bond you can’t function as a whole. Doing those Zoom calls creates a connection.”

Bullard said she is excited for when she will be able to see her classmates in person.

“We have a lot planned for when we do see each other,” she said. “It’s not going to be the same, but it’s all about working harder and bettering yourself.”