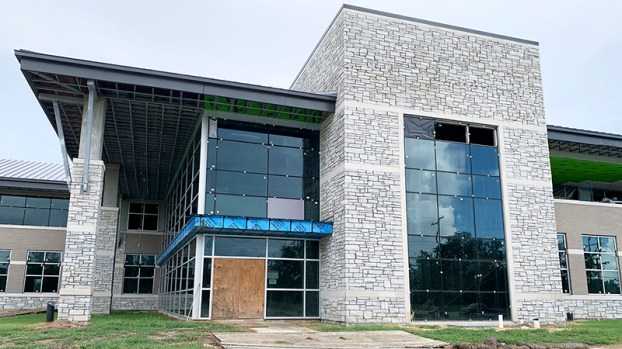 An agenda item calling for the approval of the agreement was tabled at last week’s school board meeting to await a response from the credit union.

“They could be making changes or minor adjustments,” she said. “That’s all we really know.”

PNGISD and Neches FCU entered into a lease agreement for the two-year period between June 2018 and May 2020, allowing NFCU to occupy their current location on Magnolia Avenue free of charge for 24 months.

Unable to move out of that office building before the lease ended, they agreed to pay market value per a square foot until their move. 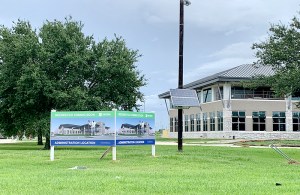 The administration location for Neches FCU is under construction on the corner of Merriman St. and Magnolia Ave. in Port Neches. (Cassandra Jenkins/The News)

Drawhorn said the district didn’t anticipate the lease extending beyond that 24-month period.

“We had a tragedy,” she said. “With the TPC explosion, I guess they weren’t able to continue work as normal and got behind.”

The initial deal goes back to 2017, when the district and credit union agreed to a land swap.

The corner property between Magnolia Avenue and Merriman Street is in close proximity to the TPC Chemical plant. Its location prohibits the construction of any facility that would hold students.

PNGISD decided the best course of action was to use the current credit union property for a new administration building, combining the West Groves Educational Center and Port Neches sites into one large office.

This opened the corner property to be used for Neches FCU’s new, larger location.

The land is valued at approximately $1 million.

Drawhorn said the school board is hoping to approve the agreement by the Aug. 10 board meeting.

“Currently, the administration offices and Pre-K students located in the educational center have moved to other areas in the district,” she said. “They’re all moved around and scattered until we can get into that new admin building. We are looking at least a year.”

The West Groves Educational Center is scheduled for demolition later this year under the 2019 Bond project.

The trail has gone cold in the search for a man who may have information about a hit-and-run that left... read more