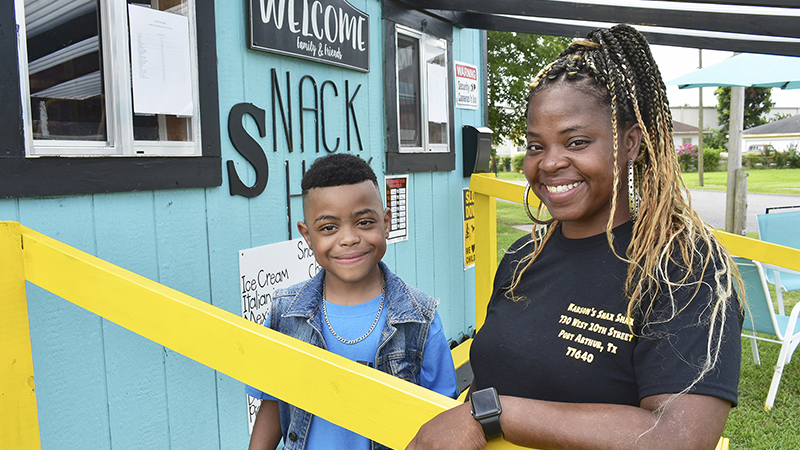 Like many mothers with their children, Aries Milo and her 6-year-old son Karson Romar build quality time around a game of Monopoly.

Well, make that many Monopoly games.

“As a land planner, I thought, you know what, I’m going to make this my first project,” she said. “He wants a business. He wants to make some money.”

Going into the first grade at Travis Elementary School, Karson has big dreams, like owning a car and starting his own family. Aries would rather Karson — whom she often calls “Papa” — consider her his favorite girl for now. 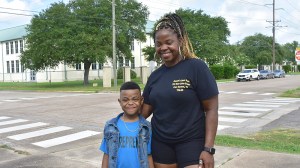 Aries Milo, posing with her son Karson Romar, was part of the first four-year Memorial High School class that attended the Lincoln campus, in the background, as freshmen. Milo finished from Memorial in 2006.

Fighting with a ‘broken heart’

Karson was born Oct. 30, 2013, at the old St. Mary Hospital but was nearly lost shortly after. He was diagnosed with hypoplastic left heart syndrome, a birth defect Milo says is very rare.

“He was only born with the right side of his heart, so his left side is completely gone,” she said. “I explain to people, he was born with a broken heart.”

Storms pelted Port Arthur and surrounding areas so hard, no ambulance could reach out to Karson until the next day. An ambulance known as The Kangaroo Crew from Texas Children’s Hospital came and brought him to Houston.

Karson nearly died three times, Milo says, and doctors recommended comfort care. That was not an option in her mind.

Karson went through three procedures (not related to each near-fatality) — the first lasting 30 days and leaving Karson on oxygen. Then his oxygen levels dropped and he had to be life-flighted to another hospital for a second stay. That one lasted six months and included a shunt being implanted in Karson’s heart.

His third hospital stay took up eight months right after Hurricane Harvey in 2017. What was supposed to be one surgery on the body of a kid turning 4 turned into four or five surgeries.

Milo was employed at Thomas Jefferson Middle School as a teacher at the time, but the recent graduate student couldn’t work.

“They sent me papers saying, ‘Hey, you don’t have any more days,’” she said. “We can’t pay you anymore. You need to make a $976 payment every two weeks to keep your insurance. I cried. I didn’t know what to do.”

Her coworkers chipped in by donating their days off to Milo’s leave bank, which had accrued to more than 70.

“I was so grateful,” she said. 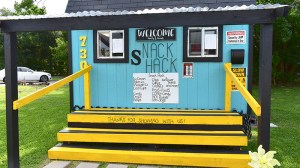 Milo was born and raised in Port Arthur. She graduated from the first four-year Memorial High School class in 2006, starting at the campus of what is now Abraham Lincoln Middle School.

Why so many academic disciplines?

“Port Arthur,” she said in a whisper. “I’m a land developer, and one of my main studies and main projects when I was in grad school was the environmental issues with the plants in Port Arthur, coming back home and in my efforts trying to revitalize areas like this. When I couldn’t get hired from my dream job — which I’m pretty sure, one day it will come — I decided to start a land planning company, and this was my first project.”

Her dream job — working at Port Arthur City Hall — is illustrated in a mural by an artist known as Eddie the Painter on the side of one of her business ventures, Karson’s Snack Shack, located at 730 W. 10th Street, behind the Lincoln campus. It shows a silhouette of a Milo graduating with her master’s and walking with Karson hand-in-hand toward the steps of city hall.

“It has significant meaning,” Milo said. “Don’t be afraid to take your child in a direction and lead them in a way you want them to go. It’s going to be powerful, to me, to a community like this. We are greatness and we come from greatness.”

Milo wanted to purchase an old snack shop located near what was then Lincoln High and preserve it in its original state as a way to pay homage, but the owner and her family did not want to sell the building, she said. The building is demolished.

Still wanting to develop an area close to the school, Milo purchased a lot for $1,500 three years ago with the help of investor Courtney Nabors.

“I just love her son, so I went over and start helping her and cutting trees,” Worthy said. “One thing about Ms. Milo, when she puts her mind to something, she does it. She always says, ‘Mrs. Worthy, I have to be in place so my son can have something. She does it all for her baby.’”

Milo created Milo & Son Ventures as a way to build income for Karson when he gets older, starting with the Snack Shack. The coronavirus pandemic gave her the extra time needed to finally set up the structure.

“The crazy thing about COVID is that a lot of people are affected by it,” she said. “I was one of those people blessed by it. The day we got that email saying teachers no longer need to come on campus to do anything, I would still instruct my kids online, but I would do it from here.”

“The ice cream is delicious,” Karson said. “It has a spoon and some frosting.”

“I thought your favorite was cotton candy,” Milo then told Karson.

“And pretzels!” he added.

Other ventures include consulting on buying and developing land and a pillow company called Plush Glam Pillows, which she operates from home. She said she’s made more than $4,000 through three weeks through Plush Glam and draws many hits on social media.

Even with a safety net from Milo & Son Ventures, the mom hopes her son’s health conditions will not deter him from achieving his own dreams. They play the Monopoly games as a way to teach Karson how to make his own money.

“Hopefully, he can do whatever he wants,” Milo said. “I don’t want to place limitations. The doctors placed limitations on him. I try not to let him do too many strenuous things. Even when he jumps on the trampoline or gets jumpy, he starts turning blue and gets out of breath, so I try to limit that, but he’s very competitive. That’s the crazy thing.”

Potential customers with the ventures or those wanting to help can call Milo at 409-724-9207.

If a career at city hall isn’t realized, Milo could take another step and go into school administration. Worthy, a former assistant principal at Jefferson, is mentoring the technology application teacher in a principal training program through the Region 5 Education Service Center.

“I was over fine arts and electives, and she was under my leadership,” said Worthy, now a health and physical instructor. “We wound up over at the PAAC [Port Arthur Alternative Center] and we’ve been working together.”

Karson’s Snack Shack gives Milo an opportunity to help revitalize a city she says has been “so stressed out by many things” and invites other citizens to help make it beautiful. She would like to develop the lot with a fence around it highlighting the history of the area surrounding Lincoln.

“I want to paint it and blast it on this fence so the kids can see there was so much greatness that came from Port Arthur,” she said. “Stop running from your town and your people! Stay here and rebuild.”