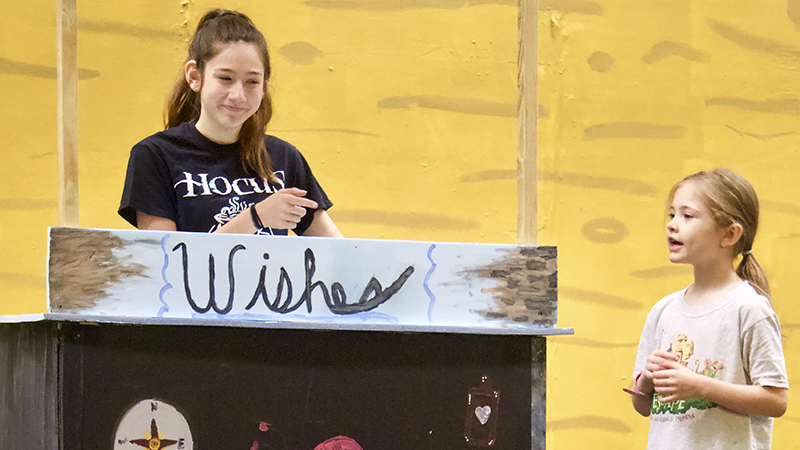 The Port Arthur Little Theatre is wrapping up their Children’s Education Little Theatre camp this weekend with a one-day production of “Witches v. Princesses.”

Camp director Rhiannon Pletcher said the performance is the culmination of a two-week acting course.

“Ever year we try and do a fairytale show that teaches a lesson,” she said. “The kids relate to fairytales a lot. We had a heavy female presence at camp this year, so this was the perfect show to do.”

“Witches v. Princesses” is a twist on modern fairytales.

“The show is about this witch queen who hosts a contest for all the witches in the land to see who can catch the most princesses or people in general,” Pletcher said. “The witch queen is set to eat them once they are all caught. This play is all about the witches and the tricks they play on people.” 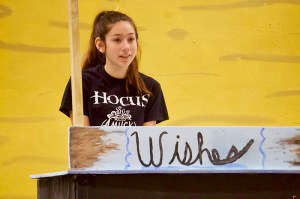 Allison Esquivel plays Witchhilda, daughter of one of the witches. (Cassandra Jenkins/The News)

“It’s actually a cage they are going into before they get eaten,” Pletcher said. “They keep them tricked for this amount of time, and there’s an author and narrator that help guide the story along. They interact with only one character in the whole show and she’s the only one that can hear the narrator speaking. She’s kind of our hero.”

The moral of the story is a random act of kindness, which plays out in the final scene of the production.

A familiar character list involves fairytale favorites like Little Red Riding Hood, The Little Mermaid, the Princess and the Pea and more. 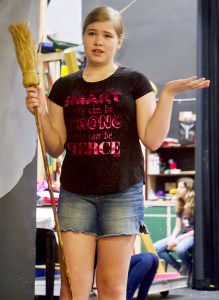 “It’s a completely new character for me,” Wallace said. “I usually play the heroine in the story or a mutual character. I get to be the villain and it’s different. It’s fun and challenging.”

Wallace said the hardest part of her role is perfecting her evil laugh as a naturally happy, bubbly person.

“It’s the complete opposite,” she said. “I have to think what would I not do.”

“It’s a lot more fun to me than playing a princesses or something,” Ewart said. “I don’t like the idea of having to be a princess at all. I’ve never liked that idea. I’m more of a tomboy.”

Wallace and Ewart are two of 15 cast members. Pletcher said due to COVID-19, this is the lowest camp attendance they’ve had in years.

CELT often brings in an average of 40 participants.

“The biggest challenge for everyone, not even just us, is the pandemic,” Pletcher said. “We do temperature checks when we walk in. We can’t give out previously opened snacks like before, etc. It’s been hard.”

Pletcher said although it was a difficult decision to make, opening the camp this summer was worth it.

“I think that the arts help people, especially at times like this,” she said. “A lot of people needed this escape. It was a difficult decision, but I think it was a necessary one.” 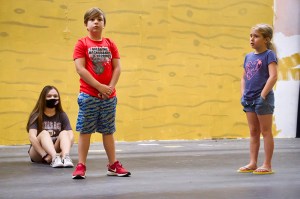 Opening weekend is July 31 with the first performance of “Peter and the Starcatcher.”

The play provides a backstory for the characters of Peter Pan, Mrs. Darling, Tinker Bell and Hook. It was meant to be the closing of last year’s season.

Due to the pandemic, the show has been in the making since February.

“This is the prequel to Peter Pan,” Pletcher said. “It’s before he got his name, before he went to Neverland, before he met Wendy, or before Wendy was even born. The show is funny. It has musical numbers in it. We have guys dressed in mermaid drag. It’s such a funny story and it’s so heartwarming at the end. It’s about childhood friendships, having to grow up and trying to keep hold of that life but ultimately moving on and finding better yourself.”

The production includes a diverse cast of all ages from seasoned veterans to newbies.

Seating is limited due to social distancing and temperature checks will be taken at the door.

To reserve a ticket, visit palt.org or its Facebook page.

In the event of a statewide shutdown, PALT members are preparing for online production of shows. Pletcher said it’s important to keep the arts going, no matter what.

“Without the arts people aren’t going to have that escape, that outlet to express themselves,” she said. “It’s a good release. People come in and if they are having a hard day, maybe they come into a drama to let it go or a comedy to forget. It’s so important for this community and really for anyone to know that the arts are still thriving even under these circumstances.”

This is the theatre’s 81st season.