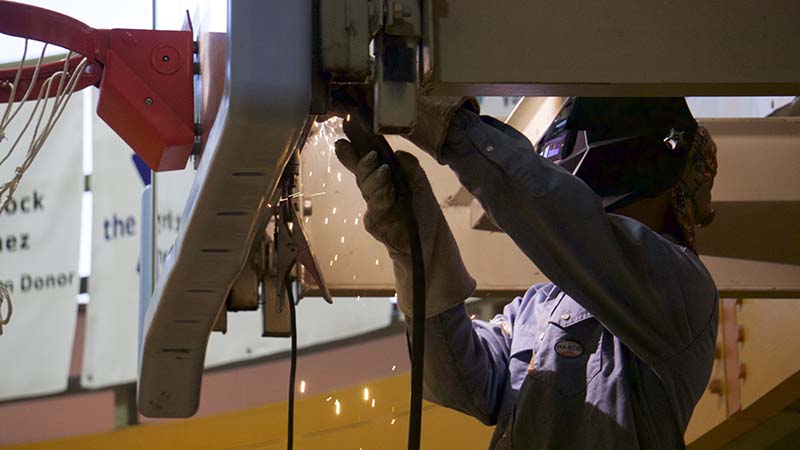 Emmanuel Lopez is an 18-year-old with ambitions as high as the sky, but a work ethic just as admirable.

His vision of success is concrete.

“I have a lot of ambitions,” Lopez said. “I want to push forward in anything I can learn about or make money in. I don’t want to just do something or be part of it, but excel and become a leader.”

The Port Arthur native spent most of his high school career in the Career and Technology Education center on campus learning as much as possible about career and moneymaking options. Lopez loved the CATE building. 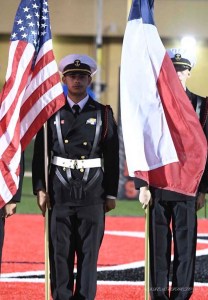 Emmanuel Lopez was an officer, color guard commander and a part of the armed drill team in the ROTC. (Courtesy photo)

A large portion of Lopez’s day was spent in the ROTC classroom.

“I was there more than anywhere else,” he said. “I put most of my hours into that program. I was in the classroom everyday, in training and even competing on Saturdays. It teaches you how to first be a follower and then become a leader.”

“[Lopez] used some of the things he was taught over the years to incorporate and make himself a leader,” Martin said. “He took some tools from both good and bad leaders. He saw the way he was treated as a junior cadet and decided not to be like that. He was an outstanding leader and student. He was always willing to teach others and went above and beyond for the school and the community.” 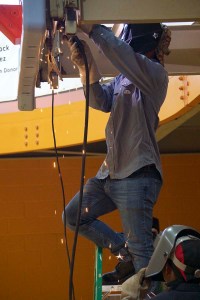 Emmanuel Lopez, a graduate of the welding program at Memorial High School, helped fix a broken basketball goal in October 2019 at the YMCA in Port Arthur.

“He’s definitely motivated,” Smith said. “He was one student that was always open to learning something new, even now I keep in touch with him. He is always trying to learn more.”

“He’s just is one of those kids that if he gets a chance to do it, he will try and then excel at it,” he said. “He was an outstanding student when I had him here in school.”

Lopez graduated with his certificate in combo welding.

“Welding is different from any other job to me,” he said. “It’s something new. The more I did it, the more I loved it. I like the competition and I wanted to be the best welder in the class and I did end up being class leader.”

Outside of school, Lopez is just as ambitious.

He started working part time in the eleventh grade at Dominican Barbershop on Gulfway Drive.

“One day I just got into it and I ended up being good at it,” he said. “I started cutting hair at ROTC for drill meets so we can all look uniform. That’s something I started doing outside of school, but I loved it and started doing it full-time this summer.”

Using welding and barbering as stepping stones, Lopez’s ultimate goal is to become a successful videographer.

“I have a plan,” he said. “I’m doing a little bit of everything right now. I’m a barber, but hoping to get a welding job soon. I’m investing money into a restaurant or a shop because what I really want to do is videography, but I need more investments first.”

Lopez said he’s done photography since he was a little kid.

“I used to have a YouTube channel with a friend of mine,” he said. “We’d travel for the summer and record and record during school. Once we got to high school we stopped speaking to each other so the channel stopped. Later on, he bought a camera. Then I bought a camera and that’s how it all started.”

Lopez wants to inspire others by documenting his personal life.

“When times get rough, I get on YouTube,” he said. “I know that sounds crazy, but that’s my therapy. I see how people start from scratch and then blow up with millions of views because they don’t give up. I’ve always looked to YouTube for inspiration and that’s something I want to do for someone else someday.”

As Lopez’s gets one closer to his goal each day, his one piece of advice for the ambitious go-getter — “Never listen to the doubters.”

“There will always be people who want to break your dreams, bring you down and tell you, you can’t do it,” he said. “Don’t listen, because at the end of the day you will be successful and it will be their loss.”