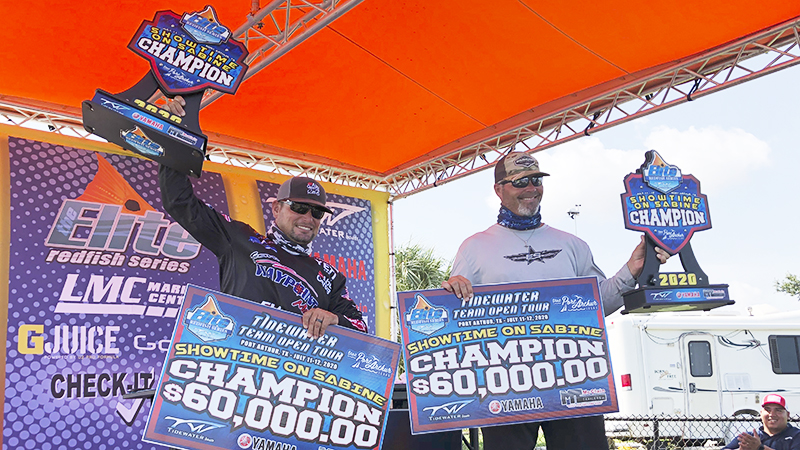 It was a hot day, for sure, but not as hot as it could be thanks to a steady wind.

I don’t know if that wind did much to help out the anglers, though.

Sunday afternoon at Pleasure Island RV Park was busy with fishing. The Elite Redfish Series hosted the Showtime on Sabine fishing tournament there that weekend.

Fishing in Sabine Lake is a great experience, as many of the anglers attested to during their weigh-ins. But like all things, nature has to have its say sometimes, and that weekend, winds, shallow waters and cloud cover were some of the issues confounding several of the tournament’s contestants.

Thankfully, staying safe amid the COVID-19 pandemic didn’t seem to be one of them.

There were people there at the park on the waterfront, for sure. They appeared to be mainly family and supporters of the anglers themselves, and most sported masks or stuck around their immediate relatives.

Most of the fishermen, too, wore buffs, as they tend to do anyway while fishing.

Showtime on Sabine was a show, filmed with cameras and broadcast live on the Elite Redfish Series Facebook page. That meant microphones and interviews were necessary parts of putting together a show.

I thought Pat Malone did a great job making sure the folks he talked to on stage were staying masked. He kept his distance while anglers spoke on stage about their fishing experiences during the tournament. He reminded the crowd several times about the need to maintain social distancing and wear masks, doing his due diligence to keep people safe. I applaud him for that.

I know not all the places he hosts these tournaments have quite as many stringent requirements to help fight COVID-19, and for what it’s worth, all the Elite Redfish Series organizers made the best of a tougher-than-normal situation.

“We got on them, told them we needed to be safe, keep our distance and make sure we wear buffs when we couldn’t keep our distance,” Malone said. “I say if we had another few days of tournaments, we would have it by about the fourth day.”
I’d say they had it pretty well on Sunday when I was there.

This tournament did what tournaments do best, foster the competitive spirit and celebrate the champions. It’s also an example of how events like these can be handled in this new normal of pandemics.

There’s still a lot we don’t know and might not know for a while about COVID-19, its spread and the best ways to fight it. Facemasks right now are one of the best that we know of.

The ERS didn’t scoff at masks or distancing. It took state and local concerns seriously and implemented practices to address them.

I hope they come back next year, because they’ve shown to be courteous of the city’s best interests.

Good luck with the rest of the series, Pat.

Brad Robichaux is a reporter for Port Arthur Newsmedia. He can be reached at brad.robichaux@panews.com