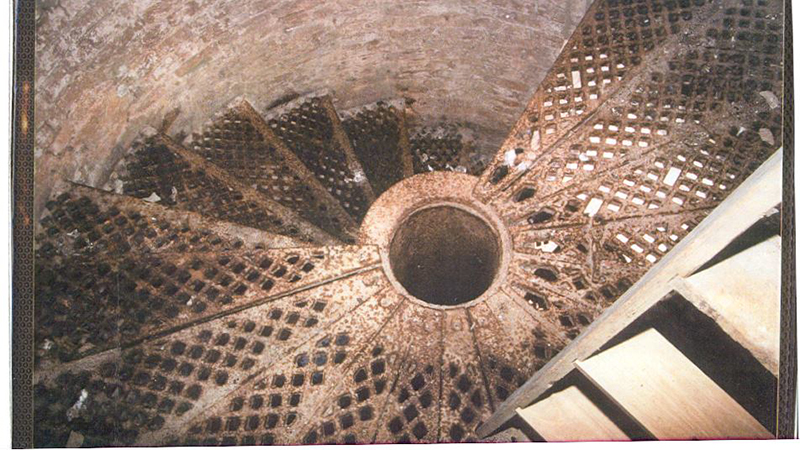 SABINE PASS — The Sabine Pass Lighthouse is undergoing renovations from the inside out.

Originally built in 1856, the Cameron Preservation Alliance started the restoration process the day after Thanksgiving. Now organizers are bringing this piece of history back to life one step at a time.

During recent excavations, the restoration crew discovered that a false floor filled between 1886 and 1900 was rubble. To plan for a new staircase, workers came up with a clever way to commemorate families and pay for the 96 cast iron steps.

Any person, family or company who donates $1,000 to the project will have a plate or plaque stating who sponsored a step.

Andrew Tingler, a member of Cameron Preservation Alliance, said they are not the first lighthouse group to do this. 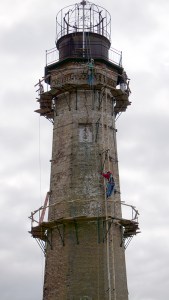 Andrew Tingler, a volunteer for the Cameron Preservation Alliance, scales the side of the Sabine Pass Lighthouse on Dec. 13. (Cassandra Jenkins/The News)

“We have to pay for restoration and money with the charity is always tight,” he said. “The Saint Marks lighthouse on the panhandle had to replace their steps. Of course theirs was wood. Another one had around 100 steps and each one had a plaque. That’s where we came up with the idea.”

Fifteen steps have already been claimed as of Monday.

Cheniere Energy, a partner in the restoration process, kicked things off by purchasing the very first step. Families from Bridge City and Baytown to Lake Charles and Moss Bluff are commemorating loved ones with a step.

Tingler said those claiming steps are lighthouse fanatics or are tied to the monument ancestrally.

“A couple of people had ancestors who worked there,” he said. “One family had a keeper who lived and worked at the Sabine Lighthouse and at the Matagorda Lighthouse. We had another family whose great grandfather worked there in the 1940s.

Other donations are from the Coast Guard and those who grew up in the area and were fascinated with lighthouses.” 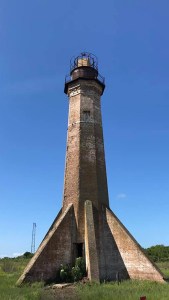 As of June 5, the Sabine Pass Lighthouse renovations include many outdoor modifications. (Courtesy image)

Dana White bought step 25 to honor “all the merchant mariners that have passed the light.”

From Baytown, step two is reserved in memory of Abner C. “Pete” Harper Sr., Seaman First Class USCG 1942-1945, who was stationed at the Sabine Pass Lighthouse during World War II.

His daughter Mollie Harper Cambre, the last in her family still residing in Texas, said she is proud to represent her father in his old place of combat.

Cambre, along with her brother A.C. Harper Jr., and their two nephews, thought dedicating the step was a perfect way to honor Harper Sr. memory.

“We know daddy would be proud,” she said.

Step four belongs to the Anderson family of Lake Charles.

For the descendants of the keepers Stephen Hill and William Hill of the Sabine Pass, Calcasieu Pass and Matagorda lighthouses, claiming a step in history is an important part of their heritage.

Robin Anderson, a great granddaughter of the Hill family, said it’s cool to still have the lighthouse in the first place.

The number four step is significant to Anderson’s husband, who was born on April 4, 1940. 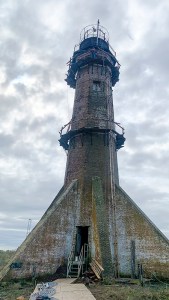 “That it’s still here is pretty remarkable,” she said. “Our family has always been in touch with that family history and it’s just wonderful to see it keep on going. To have our names on there with my great grandparents’ names in reservation of it, that’s just beyond words. It’s important for us to have their names on that step.”

Tingler said he encourages anyone who wants to place a permanent stamp on history to consider purchasing a step in the lighthouse.

“We are trying to provide a space for people to check out a historical place like this,” he said. “It means a lot to us here locally, and across the country, for people who like to go to lighthouses.”

The Sabine Pass Lighthouse is the only structure left from the civil war battleground, officials said.

Electronic donations are accepted through PayPal.

Payments can be accepted in installments.