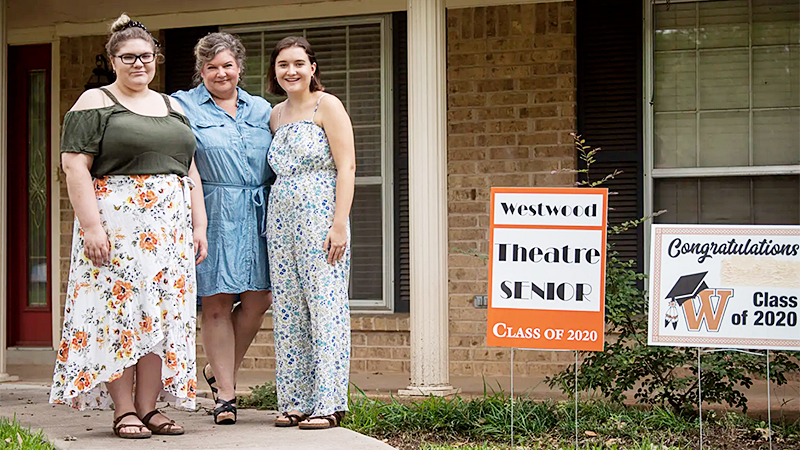 Annabelle Hicks, Ann Marie Cotman Hicks and Allison Hicks outside their north Austin home on July 1. Annabelle, a Trinity University freshman, and Allison, a University of North Texas senior, both plan to return to their respective campuses this fall. (Allie Goulding/The Texas Tribune)

Sarah Ramos has spent her summer anxiously awaiting a fall return to Texas A&M’s campus at College Station. She is hoping for some normalcy after she and her classmates were abruptly forced off campus last semester and into Zoom-based classes for the remainder of the spring due to the coronavirus pandemic.

But as Texas scrambles to address a soaring number of COVID-19 cases, Ramos is worried her upcoming course load could once again be moved online. That’s just not the college experience she’s looking for. So now, Ramos says she’s considering withdrawing from A&M for the fall and delaying her upcoming graduation.

“I do want to return to school, but the likelihood of that is teetering right now,” said Ramos, who’s working at a grocery store over the summer to save up for tuition. “I want the best education possible, and I really don’t think that I can get that online. I can’t get that from a screen.”

Texas universities are finalizing their fall reopening plans as August approaches. The state’s major public universities are generally all offering some in-person classes, though most schools have moved sizable portions of the fall course schedule online or are offering classes in a hybrid format. A&M is planning on conducting at least 50% of classes online-only, while UT will move almost one-third of its 11,000 courses online.

These plans also paint a picture of significantly-altered campus life, with spaced out dining halls, capacity caps on classrooms and mask mandates for students and faculty in some schools.

But while school will look different, the tuition rates for many of Texas’ largest universities, including UT-Austin, University of Houston, University of North Texas and Texas Tech, will stay the same.

Now Ramos, and many other students across Texas who are weighing their plans for the fall semester, are asking themselves: will it still be worth it?

This summer, nearly all Texas universities went completely online and schools including UT-Austin and Baylor offered reduced tuition while several others waived fees for campus services like parking.

Campus leaders, hammered by financial losses from the pandemic and anxious to keep enrollment up, defended their decisions to maintain normal tuition rates for fall classes that are both online and in-person.

“UT represents one of the very best values in higher education in the country,” UT-Austin interim President Jay Hartzell said last week in a press conference, noting that administrators “have been working really hard to ensure we deliver online courses at high quality and ideally make the class just as valuable as it would have been face to face.”

Acknowledging some resistance to going virtual, UT System board members in a meeting cited surveys that have shown many students said they will pause their education if universities go completely online.

Texas Tech President Lawrence Schovanec said that while around 80% of Texas Tech University’s 1,000 fall courses will be online, tuition will not be decreased in the fall.

Like many others, the school can’t afford to discount classes, because instructors are paid the same regardless. Schovanec said more than 65% of the university’s expenses are directly related to compensating faculty and other personnel.

“There’s a misunderstanding that online classes are cheaper,” Schovanec said. “When people write to me and say ‘Hey, I’m not getting face to face instruction, give me a tuition reduction,’ it’s inconsistent with the reality of our budget.”

The question of student value in the fall is poised to become a legal battle. Already more than 150 lawsuits have been filed across the country from students seeking reimbursement for tuition and fees from last spring.

Baylor University was no exception. After it closed its doors, some students who lost access to those student-funded services wanted refunds for their steep tuition rates and campus fees.

Baylor, which received around $10.7 million in federal funding to offset emergency aid and refunds for students, promised students credits for unused meal plans and dining dollars, but insisted online learning did not necessitate refunds on tuition and campus fees.

But that wasn’t enough for students like Allison King, a rising sophomore at Baylor, who filed a class-action lawsuit in early June seeking prorated refunds for tuition and fees like a $90 payment for mandatory chapel sessions. Another Baylor student, Nabor Camarena, filed a similar lawsuit at the same time.

“In any other business, if you get paid all the money and then cut the services you’re providing, we would call that profiting from a pandemic,” said Roy Willey, the attorney representing King. “The sacrifice here is on the part of the students that are paying for this.”

Baylor is the first in Texas to be sued for tuition-related grievances following the pandemic.

The university said in a statement that it stands by its decisions made in an “unprecedented time for our country and all of higher education.”

Other universities have already shelled out millions in refunds for unused services like meal plans and campus housing from last spring. While some of these losses were offset by federal funding designated by the CARES Act, much of it had to be covered by the institutions’ own budgets, leaving universities under financial strain as they worked to refund hundreds of students and award emergency aid.

The partial shift to online also has more students and parents worried about paying for college housing.

Ann Marie Hicks, who lives in Austin, will have two daughters in college this fall. With a combination of online and in-person courses, Hicks’ eldest daughter Allison, a rising senior at the University of North Texas, will only have to be in Denton for 26 days out of the entire semester.

While minimizing contact with campus is a relief in some ways, setting up living arrangements in a different city is a financial headache, Hicks said. The house Allison is planning on moving into with her partner to avoid crowded student apartments will be more than $900 in rent per month, plus additional utilities and maintenance fees. Hicks is having a hard time rationalizing the cost.

“It’s frustrating,” Hicks said. “And I’m mindful that there are many families under more constraints than we are.”

The same goes for Gaby Alvarez, a rising junior studying journalism at UT-Austin. She’s worried about contracting COVID-19 on campus – but she’s also worried about getting stuck with her lease, which she signed back in October.

As of now, Alvarez said she only has one in-person class, which isn’t a compelling enough reason to justify the $880 monthly rent she pays for an apartment near campus. Originally from Ganado, where she’s been quarantining with her elderly grandparents, she said she’d prefer to stay home if she could get out of her lease and move to all online classes.

“This is such a hard situation with a lot of moving parts,” Alvarez said. “And going back (to school) is not worth it to me, financially and health-wise.”

But the promise of the campus experience, however diluted, is a major draw for some students.

Hicks’ younger daughter Annabelle, an incoming freshman at Trinity University in San Antonio, is a theater major and is trying to take as many in-person classes as she can. Annabelle also deals with learning impediments like dyslexia, which she said makes online learning harder and in-person instruction valuable.

“Reading and communicating are already difficult face to face, but when I’m doing it through a screen it becomes even worse,” Annabelle said. “If I’m taking the risk of being on-campus anyway, what’s the point of taking classes online?”

Jorge Cantu, an international graduate student at the University of Texas Rio Grande Valley, is also watching the situation carefully. He splits his time between the U.S. and Mexico and if his classes were to be moved online, he’d remain in Mexico to save money on rent.

But he’d miss being on campus and would lose out on using the thousands of books in the university library or other research resources to finish out his thesis.

There was no refund for fees at his university during the spring closures, including the library fee, which doesn’t seem fair to him if he’s unable to use those services.

“I think that’s one of the things that pisses people off the most,” he said. ”We’re getting charged for fees that we’re not actually going to take advantage of.”

— BY RAGA JUSTIN AND REESE OXNER