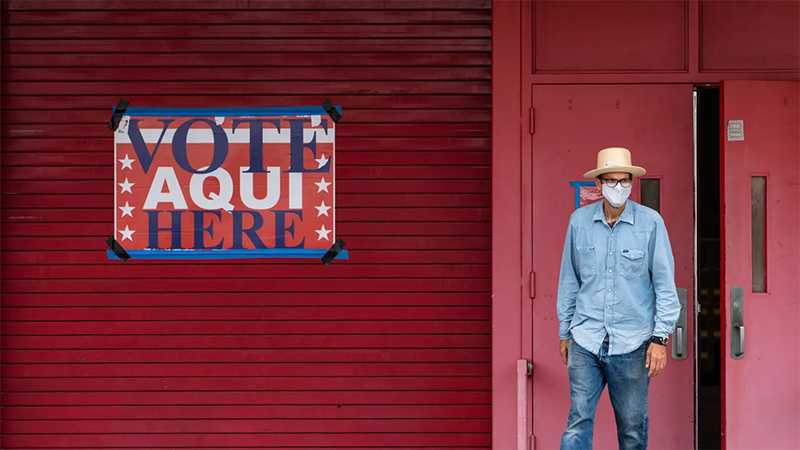 A man exits Tony Burger stadium in South Austin where early voting has begun for the July 14 runoff and special election, in Austin on June 29. (Jordan Vonderhaar for the Texas Tribune)

The exemption marks the latest chapter in a debate over voting during the pandemic that has largely focused on Democrats’ efforts — unsuccessful so far — to expand mail-in voting. Abbott has resisted calls to do so, instead postponing the runoff from late May to mid-July and lengthening the early voting period.

Abbott said during a TV interview Friday afternoon that polling places — as well as churches — were “two exemptions that are based upon constitutional purposes.”

“Your constitutional rights are not voided simply because of a pandemic,” Abbott told KBTX in Bryan.

“With the runoff … we made clear that masks are highly recommended,” Abbott said. “We don’t want to deny somebody the ability to go vote simply because they don’t have a mask, and that’s why if you look into the depths of the order, you would see that they are not mandated for people to go vote because we didn’t want anybody to say, well, they couldn’t vote because they didn’t have a mask. However, we know that the safest way to go vote is by wearing a mask.”

The exemption is one of 11 outlined in Abbott’s mask order, which he announced Thursday as the state continued to confront a surge in the novel coronavirus. The order, which goes into effect at 12:01 p.m. Friday, requires Texans in most counties to wear a face covering over their nose and mouth when inside a business or other building open to the public, as well as outdoor public spaces.

Earlier in the pandemic, Abbott had blocked local governments from requiring people to wear masks, though he later clarified they could order businesses to mandate that customers wear masks. Even earlier this week, though, Abbott had said a statewide mask mandate was not necessary, pointing out that not every part of the state was being hit as badly by the virus.

The exemptions also include people younger than 10 years old, people who have a medical conditions that prevents them from wearing a mask, people who are eating or drinking, and people who are exercising outdoors — as long as they are keeping their distance from others.

The exemptions also include people who are participating in religious services, which Abbott also exempted from his stay-at-home order in April, a controversial decision at the time.

Another key exemption is for people living in counties with 20 or fewer cases, though they are not automatically exempted and the counties have to opt out by submitting an application to the state.

As for the voting exemption, the order says it exempts “any person who is voting, assisting a voter, serving as a poll watcher, or actively administering an election, but wearing a face covering is strongly encouraged.” The Houston Chronicle reported Thursday that the order “appears to make Texas the only state in the country that exempts voting from a mask mandate,” citing information from the mask advocacy group Masks4All.

Jackson Lee gave a nod to Abbott’s order, but called for further action.

In her capacity as a member of Congress, she backed more federal funding for testing, hospitals, small businesses and protective medical equipment. But she also called for more local control, arguing that “stay-at-home orders [should] be given through our local mayors and local county government based upon the science and the numbers of cases we have.”